Military service members and veterans are more likely to smoke than members of the general population (McKinney et al., 1997). Researchers have been investigating both the reasons for the increased rates of nicotine use and any factors that might give military personnel who smoke better chances of successfully quitting. This week, as part of our Special Series on Addiction among Military Personnel and Veterans, the ASHES reviews a prospective study that explored both smoking initiation and quitting among soldiers deployed to Iraq (Harte et al., 2014). 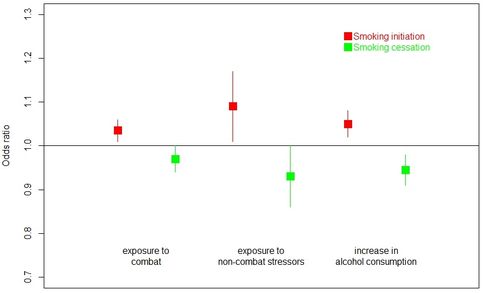 Conclusion
It should come as no surprise that exposure to stressful combat and non-combat events is positively associated with initiating smoking and negatively associated with quitting. There have been many news articles and features reporting the links between the stress soldiers experience in war and the mental health problems they suffer later on in life. While larger looming problems such as PTSD have had more of the spotlight (and deservedly so), nicotine use also poses a significant threat to veterans’ health. Providing veterans with  comprehensive, accessible, and integrated medical and mental health services might reduce the rates of post-deployment smoking and other expressions of addiction, thereby producing long-term improvements in quality of life.

Are you, or is a loved one, a U.S. service member who wants help to quit smoking? Check out these resources sponsored by the U.S. Department of Defense.