The DRAM previously reviewed a study showing that returning veterans with mild traumatic brain injuries (mTBIs) are at an elevated risk for developing alcohol and drug use disorders, compared to veterans with other kinds of injuries. This week, as part of our Special Series on Addiction among Military Personnel and Veterans, we explore how brain injuries and substance use impact the ability to function in daily life. More specifically, we review a study that examined how mTBI, PTSD, and long-term alcohol use relate to associative learning, an important aspect of brain functioning (McGlinchey et al., 2014). 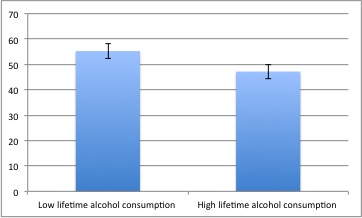 The negative impact of substance use disorders, including alcohol abuse, on public health is well documented. However, more research is needed to uncover the joint effects of post-war complications, including brain injury and substance use, on veterans’ re-entry into civilian life. These study results suggest that veterans can maintain intact basic associative learning and memory function after war, but that these abilities suffer with continued alcohol abuse. To better understand this phenomenon, researchers could use larger samples, study participants over a greater period of time, and examine how associative learning responds to substance use disorder treatment.

1 An additional group of participants who had only mTBI (N=7) only was too small data analysis.