STASH, Vol. 10(6) - Unemployment among veterans with substance use disorders and comorbid conditions

Veterans often face challenges when they return home from serving overseas. Unemployment is one such challenge. Some veterans might have trouble finding jobs because they are struggling with mental health problems, such as substance misuse, anxiety, post-traumatic stress disorder (PTSD), and depression. This week, STASH reviews a study of employment among vets with substance use disorders who either have, or do not have, co-occurring psychiatric and general medical conditions (Humensky et al., 2013). This review is part of our Special Series on Addiction among Military Personnel and Veterans. 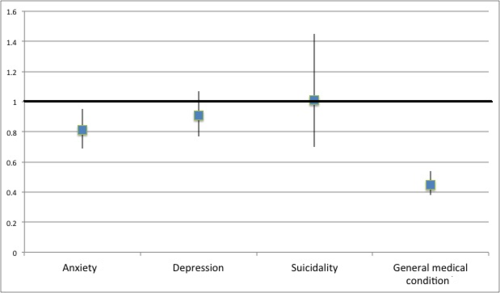 Figure 1: Odds ratios (blue boxes) and 95% confidence intervals (gray lines) for having any past-month earnings, depending on having each co-occurring psychiatric or general medical condition. When confidence intervals are completely below 1.0, the odds of having any earnings are lower among veterans with the corresponding co-occurring condition, compared to veterans without that condition. This is the case for anxiety and general medical condition. Adapted from Humensky et al. (2013).

Conclusion
Finding and keeping a job is an important part of daily life. The majority of veterans in substance use disorder treatment were unemployed both when they started treatment and at follow-up. Those who also experienced anxiety and general medical conditions were especially at risk for continued unemployment. Treatment providers should identify patients who are at higher risk for unemployment and try to connect them with supportive programs.