ASHES, Vol. 10(6) - One Last Cigarette: Tobacco use disorder is associated with greater risk of suicide mortality

Past studies have reported contradictory results regarding the association between tobacco use and risk of suicide (Hemmingsson & Kriebel, 2003; Li, Yang, Ge et al., 2012; Miller, Hemenway, & Rimm, 2000). However, small sample sizes due to the rarity of suicide, and possible unaccounted confounders such as psychiatric illness have limited many of these studies. This week’s ASHES reviews at a study that examines this association within a very large Veterans Health Administration (VHA) sample (Bohnert, Ilgen, McCarthy et al., 2014). 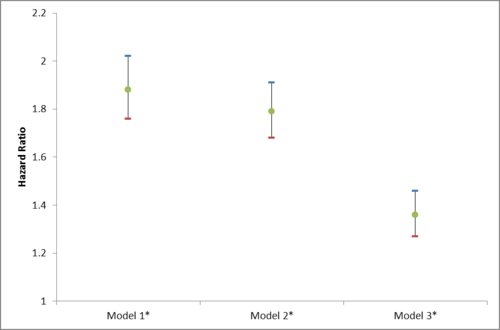 1Charlson comorbidity score: an established measure that classifies comorbidity according to severity