The WAGER, Vol. 19(7) - All In: Life stresses among Concerned Significant Others

Gambling Disorder creates havoc for people who gamble. It might also create havoc for Concerned Significant Others (CSOs) — gamblers’ parents, spouses, children, friends, and colleagues (Shaw, Forbush, Schlinder, Rosenman, & Black, 2007). Studies on the impact that gambling-related problems have on personal and social relationships for CSOs are scarce. This week’s WAGER reviews a study that examined the health, social support, and financial situations of CSOs (Svensson, Romild, & Shepherdson, 2013). 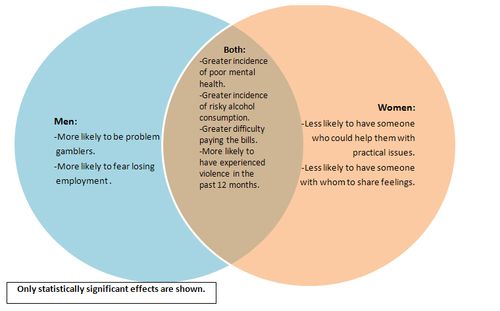 Conclusions
The results of this study support the idea that CSOs suffer from serious and long-lasting mental health, social support, and financial effects. Though male and female CSOs experience many of the same difficulties, there were some marked gender differences. Male CSOs were more likely to be problem gamblers, and to have more work, debt, and legal problems than female CSOs. Female CSOs, on the other hand, were more likely than male CSOs to experience problems in relationships and to have greater physical and mental health difficulties. While this study showed important gender differences between CSOs, future research could examine differences between other types of CSOs. For example, there may be significant differences between colleagues and spouses of problem gamblers that could further illuminate the adverse effects that CSOs experience. Though CSOs show negative effects in various domains, ex-CSOs offer hope that there are opportunities for positive change.

Svensson, J., Romild, U., & Shepherdson, E. (2013). The concerned significant others of people with gambling problems in a national representative sample in Sweden- a 1 year follow-up study. BMC Public Health, 13.

1Researchers asked the following information for each of the variables: