Two decades ago, multimedia CD-ROMs were the cutting edge of intervention technology; one decade ago, interactive websites were at the forefront; today, “there’s an app for that.” But is there anything particularly effective about the newest intervention modality? Unlike CDs and websites, interventions that use a mobile platform allow messages to reach users rapidly no matter where they are. Continuing the BASIS Special Series on Addiction and Technology, this week’s ASHES reviews a study evaluating a text-message based  intervention for smoking cessation (Naughton et al., 2014).

Figure 1. Abstinence Rates for Patients in the TAU and iQuit Smoking Cessation Conditions 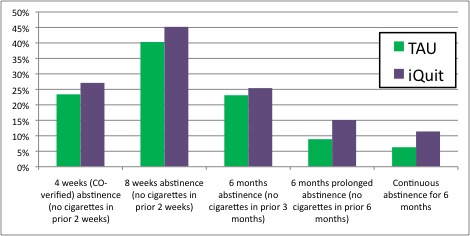 Note. Continuous abstinence for 6 months is operationalized as qualifying for abstinence on each of the other four abstinence measures.  *Difference between conditions, p < .05.

The current study offers evidence that text-message based interventions for smoking cessation might improve smokers’ chances of maintaining abstinence across time. In particular, approximately 20% of the intervention participants in this trial made use of the relapse situation feature of iQuit. The instant availability of help in these instances might be a particularly unique and valuable contribution of mobile platform based interventions such as this one.