The DRAM, Vol. 10(9) - Helping more than your lungs: Smoking cessation and reductions in risk for mood/anxiety disorders and alcohol use disorders

Since many people smoke to self-medicate mood and anxiety symptoms, it is unclear whether attempts to quit or reduce smoking will lead to worsening symptoms for these people. In this edition of the DRAM, we review a recent article investigating the association between quitting or reducing smoking and rates of mood/anxiety and alcohol use disorders. Cavazos-Rehg et al. (2014) compare smoking cessation between two groups: individuals with and without pre-existing disorders. 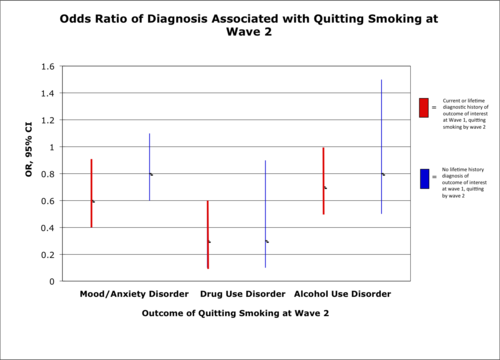 Please click on image for a clearer picture, or adjust your browser's zoom settings.

Contrary to conventional assumptions that smoking cessation might lead to other drug use or higher prevalence of psychiatric symptoms, this study provides evidence against that argument. Among smokers with prior co-morbid disorders, quitting smoking was associated with reduced risk for mood/anxiety disorders and alcohol disorder.  This study does not provide causal evidence of the relationship between smoking cessation and mood/anxiety disorders and alcohol use disorders. For example, individuals who have better control over their psychiatric illnesses might be better equipped to quit smoking. However, smokers have a high prevalence of alcohol or drug use disorder and mood/anxiety disorders (Kalman et al. 2005; Lawrence et al. 2009); therefore, the finding that quitting smoking is associated with improved mental health is important news, particularly for clinicians developing treatment plans for patients who smoke cigarettes and have comorbid disorders.

What do you think?