« College students are vulnerable to addiction: Can we do anything to help? | Main | Register now: Addiction Medicine Continuing Education Course »

STASH, Vol. 10(10) - College student reports of driving under the influence

Driving under the influence (DUI) of intoxicants is an ongoing public health issue. Although most attention focuses on alcohol-related DUI, public health stakeholders recently have directed more attention toward DUI of other drugs. Reports suggest that cannabis use, for example, doubles one’s risk for a motor vehicle crash (Asbridge et al., 2012). This week, as part of our Special Series on Addiction and College Students, STASH reports on a recent study of college student cannabis- and alcohol-related DUI (Whitehill et al., 2014). 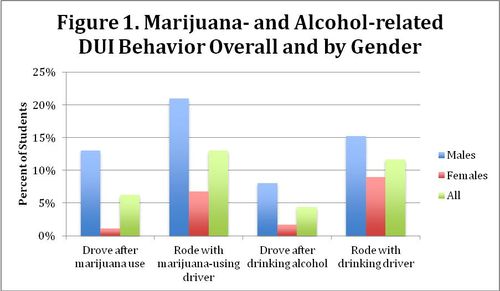 Conclusion
Marijuana-related DUI behavior is as common as alcohol-related DUI behavior among college students. Although we have much to learn about the public health implications of marijuana consumption, positive and negative, with respect to traffic safety a conservative approach would suggest the need to develop effective drugged driving prevention efforts in anticipation of additional legalization.