« The WAGER, Vol. 19(10) - Can outcome expectancies predict gambling problems in student-athletes? | Main | Introduction to the Special Series on Addiction and College Students »

The DRAM, Vol. 10(10) - Doubling down: Changing drinking behavior in college students who drink and smoke

Today we continue our Special Series on Addiction and College Students. Some research suggests that college students who smoke drink more heavily and frequently than nonsmokers (Weitzman & Chen, 2005). This combination presents health problems. Computer-assisted and mobile phone-based interventions hold promise for people in the college population, who increasingly interact with and rely upon mobile electronic devices in their daily lives. This week’s DRAM reviews the success of a brief mobile intervention that targets both heavy drinking and smoking in a group of college students (Witkiewitz, Desai, Bowen, Leigh, Kirouac, & Larimer, 2014).

Figure 1. Changes in Smoking and Drinking Behaviors from Baseline to Follow-up in Each Condition (adapted from Witkiewitz et al., 2014). 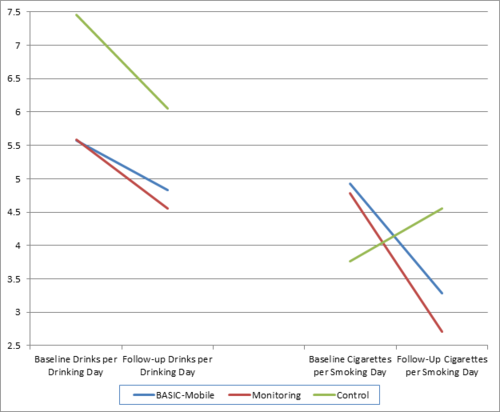 Note. Each line represents the change from baseline to 1-month follow-up.

Both the BASICS-Mobile group and the group who received daily monitoring reduced their smoking from baseline to follow-up, but the control group did not. These results indicate that some form of mobile assessment and monitoring might help people to control their smoking urges, regardless of whether an intervention is attached. Surprisingly, the BASICS-Mobile intervention did not reduce drinking quantity more than the control condition. It could be that a two-week intervention period is not enough time to make much of a change in drinking behavior in this population. Drinking is more engrained in the social fabric of college than smoking, which is a solitary behavior. Students who were already drinking when they received the mobile assessment could find it harder to complete than students who had enjoyed a cigarette or two. Future research could compare the compare the lengths of various CBT-based mobile interventions (2 weeks vs 8 weeks, etc.) to find the optimal length of intervention delivery period for drinking behavior.