« The patient is not the diagnosis: Addiction understood from a liberation psychology perspective | Main | Promoting Cultures of Recovery in Tribal Nations: NARCH »

ASHES, Vol. 10(12) - One size does not fit all: Geographic variability in Native American smoking and lung cancer deaths

In their recent editorial, Skinstad and Norman note that “tobacco is a substance that is well-known and well-accepted in American Indian communities” and “sacred,” but “not meant to be abused.” One health issue regularly associated with frequent tobacco use – and smoking in particular – is lung cancer. Smoking and cigarette smoke are by far the most common cause of death by lung cancer. This week, as part of our Special Series on Addiction and Recovery among Tribal Communities, ASHES reviews a study exploring whether lung cancer mortality and smoking prevalence rates are relatively high among American Indian/Alaskan Native (AI/AN) communities, either throughout the United States or only in particular regions (Plescia et al., 2014). 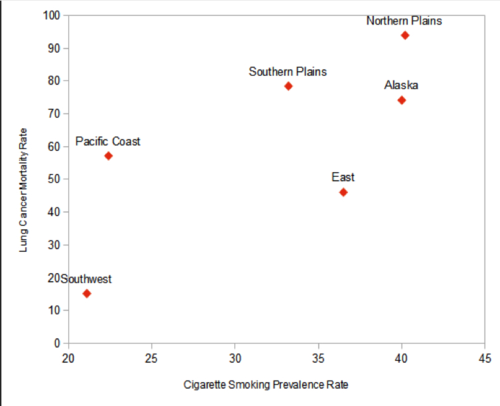 This study revealed that rates of lung cancer mortality are not universally higher among AI/AN persons compared with non-Hispanic Whites; in fact, in the East and Southwest, rates were lower among AI/ANs. Not surprisingly, across all regions, lung cancer mortality was closely linked with smoking. These findings are a reminder that the AI/AN population includes a diverse range of tribal communities across the United States, each with a particular constellation of regional culture, local idiosyncrasies, and ethnic/familial influences. If efforts towards raising awareness about the hazards of smoking are going to be effective, researchers will have to discover which factors at what level influence smoking behavior the most. That way, public health officials can tailor their educational efforts towards combatting the relevant influences in their specific local environments.