During the month of November, we will be marking American Indian Heritage Month with a Special Series on Addiction and Recovery among Tribal Communities. We will proudly present invited Op-Ed/Editorials written by researchers and clinicians with unique perspectives and expertise in this area. First, on November 7, Dr. Anne Helene Skinstad of the National American Indian and Alaska Native Addiction Technology Transfer Center and Dr. Dennis Norman of the Harvard University Native American Program describe some important lessons they have learned conducting Community Based Participatory Research within tribal communities. Next, on November 14, Dr. Kate Spilde of San Diego State... Read more →

Editor's Note: This week, we conclude our Special Series on Addiction and Recovery among Tribal Communities with an Op-Ed/Editorial by Martina Whelshula, Ph.D. Dr. Whelshula shares some exciting news about a research-clinical partnership dedicated to supporting tribal communities in building sustainable recovery environments for their children impacted by substance use disorders. Rarely has such a unique and multi-faceted opportunity presented itself where seven tribal nations unite with a research university to tackle recovery from addiction for their children. In 2014, several national agencies, institutes, and centers partnered with the Indian Health Service (IHS) to support the Native American Research Centers... Read more →

ASHES, Vol. 10(12) - One size does not fit all: Geographic variability in Native American smoking and lung cancer deaths 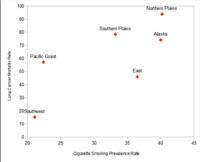 In their recent editorial, Skinstad and Norman note that “tobacco is a substance that is well-known and well-accepted in American Indian communities” and “sacred,” but “not meant to be abused.” One health issue regularly associated with frequent tobacco use – and smoking in particular – is lung cancer. Smoking and cigarette smoke are by far the most common cause of death by lung cancer. This week, as part of our Special Series on Addiction and Recovery among Tribal Communities, ASHES reviews a study exploring whether lung cancer mortality and smoking prevalence rates are relatively high among American Indian/Alaskan Native (AI/AN)... Read more →

The patient is not the diagnosis: Addiction understood from a liberation psychology perspective

Editor's Note: This week, we continue our Special Series on Addiction and Recovery among Tribal Communities with an Op-Ed/Editorial by Eduardo Duran, PhD. Dr. Duran, a clinical psychologist, describes ways in which Native beliefs and values can inform the treatment of addiction and other health conditions. After having worked extensively for several decades in Indian Country dealing with the effects of soul wounding (historical trauma), I have learned that communities prefer to heal the soul wound by utilizing theory and practice that has Indigenous roots. The manner in which Native epistemology perceives the lifeworld differs from the lifeworld that is... Read more →

The consequences of excessive alcohol consumption are a serious burden on any population. Alcohol-related mortality accounts for the highest proportion of preventable deaths in the United States but represents a more serious health concern in certain groups, including American Indians and Alaska Natives (AI/ANs) (May, 1994). This week, as part of our Special Series on Addiction and Recovery among Tribal Communities, The DRAM reviews a study of drinking-related deaths among American Indians and Alaska Natives (Landen, Roeber, Naimi, Nielsen, & Sewell, 2014). Methods The researchers used population estimates developed by the US Census Bureau and the Centers for Disease Control... Read more →

The Work of Nations: Cultivating Wealth and Health in Indian Country

Editor's Note: This week, we continue our Special Series on Addiction and Recovery among Tribal Communities with an Op-Ed/Editorial by Katherine Spilde, Ph.D. Dr. Spilde is an Associate Professor at San Diego State University and the Endowed Chair of the Sycuan Institute on Tribal Gaming. Here, she shares her experiences witnessing, and helping to document, the benefits of tribal economic development for tribal wealth and health. Like last week's guest contributor, Dr. Anne Helene Skinstad, Dr. Spilde has learned that it is essential for researchers interested in tribal communities to approach their research questions with cultural sensitivity, a genuine desire... Read more →

Editor's Note: This week, The WAGER was guest-edited by Doug Walker, PhD, Professor of Economics at the College of Charleston. Dr. Walker is currently Visisting Professor in the Department of Psychiatry at Harvard Medical School and the Division on Addiction, Cambridge Health Alliance. Researchers have consistently documented a relationship between low income and low health (Currie and Lin, 2007). Some of the most impoverished areas of the United States, most notably American Indian reservations, have opened casinos to inject financial resources into their communities. If socioeconomic status and health are related, a higher income could potentially result in better health... Read more →

Editor's Note: This Op-Ed/Editorial is the first editorial installment of our Special Series on Addiction and Recovery among Tribal Communities. Dr. Anne Helene Skinstad of the National American Indian and Alaska Native Addiction Technology Transfer Center and Dr. Dennis Norman of the Harvard University Native American Program describe the history of, and current need for, American Indian Heritage Month. They then describe some important lessons they have learned conducting Community Based Participatory Research within tribal communities. November, the American Indian Heritage Month, has become more and more acknowledged and visible. However, when celebrating this month, we suggest that we need... Read more →