« The Work of Nations: Cultivating Wealth and Health in Indian Country | Main | The patient is not the diagnosis: Addiction understood from a liberation psychology perspective »

The consequences of excessive alcohol consumption are a serious burden on any population. Alcohol-related mortality accounts for the highest proportion of preventable deaths in the United States but represents a more serious health concern in certain groups, including American Indians and Alaska Natives (AI/ANs) (May, 1994). This week, as part of our Special Series on Addiction and Recovery among Tribal Communities, The DRAM reviews a study of drinking-related deaths among American Indians and Alaska Natives (Landen, Roeber, Naimi, Nielsen, & Sewell, 2014). 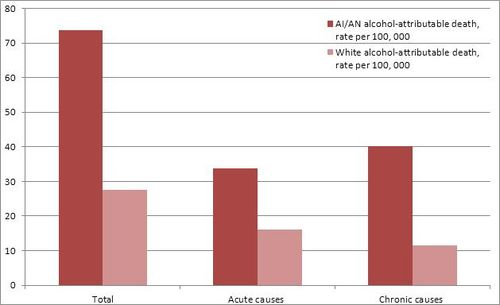 Figure 1. Alcohol attributable death rates per 100, 000 for each race separated by cause of death. Adapted from Landen et al., 2014.

Conclusions
There is higher relative risk of alcohol-attributable death for AI/AN individuals compared to Whites across the United States. The discrepancy between the AI/AN and White populations has been consistent in its nature, without significant fluctuation evident in the decade of data the researchers studied. The results of this study indicate that excessive alcohol use is an insidious problem within AI/AN communities and necessitates targeted, early-intervention and prevention strategies and programs aimed at reducing alcohol consumption and related consequences. Increased alcohol taxes, limited hours of sale, electronic screening and brief intervention, and enhanced enforcement of laws prohibiting sales to minors are strategies that have shown promise in the general population. Among the AI/AN population specifically, culturally based healing programs, such as the Wellbriety Movement, might prove especially helpful in promoting sobriety, recovery, and general wellness.

May, A. P. (1994) The epidemiology of alcohol abuse among American Indians: the mythical and real properties. American Indian Culture and Research Journal,12(2). P121-143.