« Happy Holidays from The BASIS! | Main | STASH 10(14): Perceived discrimination as a risk factor for substance use disorders »

Smoking bans and other public health initiatives have been effective at decreasing smoking (see ASHES 9(5)) as well as possibly reducing the rate of alcohol use disorders (See The DRAM 9(7)). However, the specific relationship between smoking bans and drunk driving has not been thoroughly explored. It is possible that individuals might drive longer distances to bars outside their county in order to smoke, potentially increasing the risk of drunk driving. This week, as part of our Special Series on Driving Under the Influence of Intoxicants, we review a study that examined how drunk driving fatalities have varied with the adoption of smoking bans (Adams & Cotti, 2008). 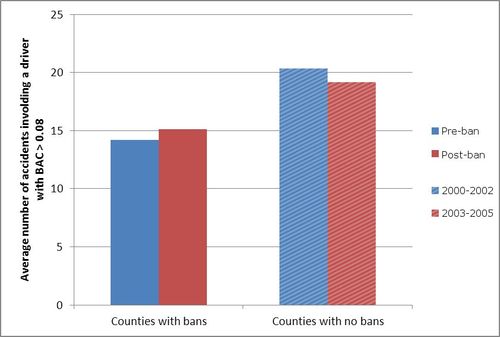 Figure 1: Rates of Alcohol related traffic accidents in counties with and without smoking bans

Conclusion
The results of this study suggest that smoking bans might lead to higher rates of alcohol-related accidents. This could be due to individuals driving further distances to avoid the ban. However, a more recent study also using FARS data failed to find any significant relation between smoking bans and alcohol-related crashes (Bernat et al. 2013). The key differences between the two studies were geographic unit of the analysis (Bernat examined smoking bans on at a state, rather than county level) and the model used to analyze the data. It is possible that the effect seen in Adams and Cotti (2008) is only applicable at the county level, where the driving distances required to find alternate bars are still practical. Additionally, this effect might become less relevant as smoking-ban policies become standard at a statewide level.