STASH 10(14): Perceived discrimination as a risk factor for substance use disorders

Recent events have brought perceived racial discrimination, particularly in the context of police interactions, to the forefront of the country’s consciousness. Researchers have previously explored the  link between experiences of discrimination and stress-sensitive mental health disorders among racial and ethnic minorities (Hunte & Barry, 2012). However, there are many unanswered questions. For example, do certain types of discrimination increase the risk for specific disorders, such as drug abuse and depression? Does more frequent perceived discrimination lead to more negative outcomes? This week, we review  a study that examined the link between perceived discrimination and mental health/substance use disorders among American racial minorities (Clark et al, 2015). 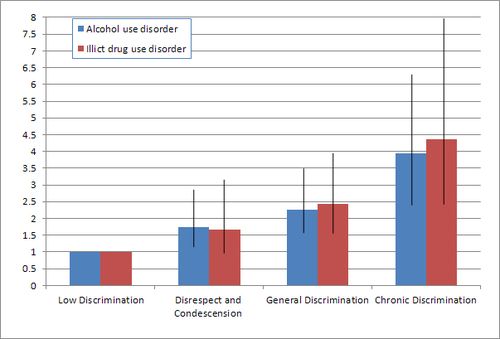 Figure 1: Risk ratios and Confidence Intervals of having a lifetime alcohol or illicit drug use disorder based on frequency and type of perceived discrimination (adapted from Clark et al., 2015).  Note: The Low Discrimination group was used as reference group for risk ratio estimates.

The results of this study indicate a strong link between perceived discrimination—particularly that of a hostile or character-based nature— and risk for substance use and mood disorders. Most strikingly, people who reported chronic discrimination were over four times more likely to abuse or be dependent on illicit drugs. It is also noteworthy that in this general population study, 51% of the sample reported recurrent or even frequent experiences of disrespectful/condescending and hostile/character-based discrimination.

Due to the cross-sectional nature of the study, the precise link between perceived discrimination and mental health  is unclear; there are several plausible pathways. People who experience more frequent discrimination, especially of a hostile and threatening nature, might be more likely to turn to drugs to deal with stress. It is also possible that people with mood and drug use disorders are more likely to perceive discrimination and threats coming their way—perhaps because they adopt a ruminative style, causing them to dwell on negative experiences and remember specific instances of discrimination. Future studies could gather longitudinal data starting in adolescence to determine the complex interaction between discrimination and onset of substance use and mood disorders.

[1] Defined as abuse or dependence.

[2] Also defined as abuse or dependence.

Posted at 11:39 AM in Science Threads on Addiction, Substance Use, and Health (STASH) | Permalink