Unlike traditional economics, behavioral economics recognizes that people do not always make decisions in entirely rational ways. However, certain decisions can be imperfectly rational (i.e., basically rational but flawed because of cognitive deficits, biases, or lack of understanding of consequences) or irrational (i.e., based on emotions and personality instead of consideration of future consequences), and this distinction has implications for how we intervene to change behavior. This week’s DRAM, part of a Special Series on Driving Under the Influence of Intoxicants, reviews a study by Sloan, Eldred, and Xu (2014) that tests whether driving after drinking can be understood as an imperfectly rational decision or irrational behavior. 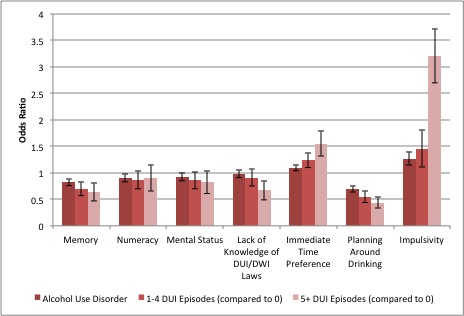 The results of this study suggest that cognitive impairments distinguish people with alcohol use disorders from those without but do not account strongly for drinking and driving behavior. Those who reported drinking and driving in this study had some self-reported memory problems, but did not differ from others on mental status or numeric ability. They also had a better knowledge of local DUI/DWI laws and could therefore presumably anticipate the consequences of their actions. Instead, DUI was more closely linked with preferring immediate gains, lack of planning, and impulsivity. This suggests that people who engage in drunk or drugged driving will benefit more from interventions that address underlying self-control and mental health issues than from interventions that focus on general alcohol and DUI education.