The DRAM, Vol. 11(1) - The not-so-simple link between drinking at an early age and alcohol use disorder

Across addictive behaviors, there is one association that is consistently observed, across studies, methodologies, and samples: substance use at an early age is associated with later problems. Age of onset is one of the best predictors of substance use problems and disorders. We often assume, based on this association, that delaying age of onset ought to reduce the rate of substance use disorders. This week’s edition of The DRAM reviews a study by Ystrom and colleagues (2014) that suggests otherwise for alcohol use. 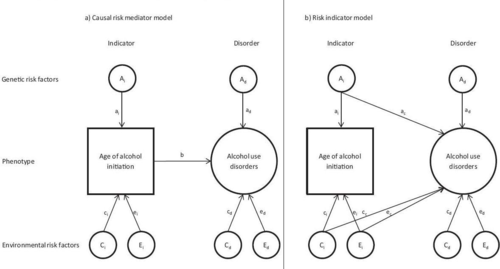 Figure 1. Theoretical ACE twin study models for the relationship between age of alcohol use initiation and lifetime alcohol use disorder (reprinted from Ystrom et al., 2014). Click to enlarge. 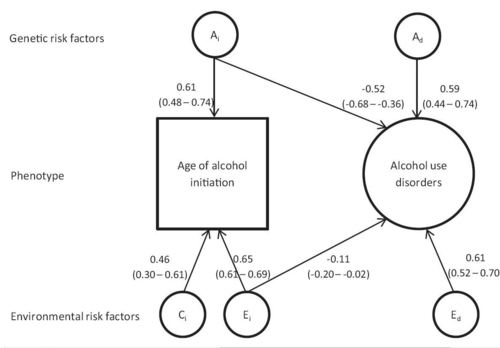 Figure 2. Best-fitting ACE twin study model for the relationship between age of alcohol use initiation and lifetime alcohol use disorder (reprinted from Ystrom et al., 2014).

The results of this study suggest that age of onset of drinking is a strong marker for AUD risk, but not a cause. In other words, people at risk for the development of AUD due to genetic and environmental risk factors are also likely to begin drinking earlier, but this early drinking does not itself contribute substantially to the development of AUD. This suggests that preventing early drinking is unlikely to prevent AUD among these at-risk individuals. Early substance use has many other negative consequences, including irreversible effects on the developing brain, so this study should not be taken as grounds to cease prevention efforts. Instead, the findings suggest that intervention efforts need to also identify and focus on those modifiable risk factors that influence both early alcohol use and the development of AUD.

1 To combine the measures of AUD, the researchers conducted a confirmatory factor analysis and then included the latent AUD construct in other models.

2 Wondering where this number comes from? It derives from the path-coefficient in Figure 2 representing genetic influence on age at alcohol initiation. We square this value – 0.61—in order to estimate the proportion of variance in age of alcohol initiation explained by genetic risk factors.