« STASH 10(14): Perceived discrimination as a risk factor for substance use disorders | Main | The DRAM, Vol. 11(1) - The not-so-simple link between drinking at an early age and alcohol use disorder »

The WAGER, Vol. 20(1) - In pursuit of something different: Chasing losses among online poker players and online casino patrons

“We play because poker is not a scratch-off ticket, a half-court jumper, or a knock on wood. It’s no game of luck, poker.” These lines provided the opening of a commercial for a once-famous online poker service—and ad designed to appeal to poker players who feel superior to other gamblers because, they believe, they rely on skill rather than irrational beliefs and behaviors. One irrational behavior associated with gambling disorder  is “chasing losses” – placing bets in an attempt to win back money lost in previous bets. This week, The WAGER reviews a study that explores chasing losses and its potential predictors—including game preference (Gainsbury et al., 2014). 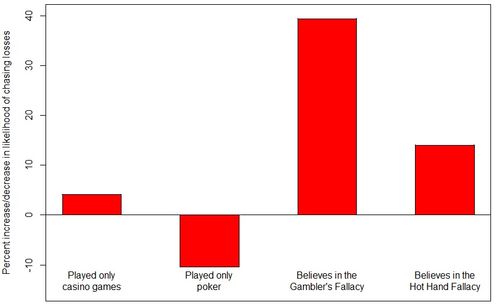 In this study, the authors observed that other factors being equal, gamblers who played online poker but did not play in online casinos were less likely to chase losses. With respect to this specific behavior, the group that could be interpreted as “poker purists” or “poker specialists” was different. One reason for this might be that several poker books, instructional videos, and podcasts warn players against the dangers of irrationally chasing losses (e.g., Tendler and Carter, 2011). From a clinical perspective, because chasing losses is less likely among poker players, it might be an especially valid indicator of loss of control. If so, then this might be a case where a clinician with more familiarity with the culture of the game can make a more informed diagnosis. It is true that clinicians should be careful not to over-generalize clients based solely on game selection. However, they should also be open to opportunities to utilize aspects of these cultures to help their clients correct their misconceptions and habits.