The DRAM, Vol. 11(2) - Investigating interlock device compliance: Who gets better and who gets by?

All 50 states require convicted repeat, and in some cases first-time DUI offenders to install ignition interlock devices (IIDs). These devices require drivers to breathe into them and allow the car to start only if the driver’s breath alcohol concentration is below the programmed limit. IIDs are very effective at reducing DUI recidivism while they are installed (Voas et al., 1999). However, offenders often return to drunk driving once their IIDs are removed (e.g., Marques, Voas, Roth, & Tippetts, 2010). One potential explanation for this problem is that some DUI offenders are unable or unwilling to change their broader drinking patterns, including their tendency to drink outside the home with friends.This week’s edition of The DRAM reviews a study that investigated what distinguishes DUI offenders who change their drinking patterns in order to adapt to IIDs from those who do not (Beck, Kelley-Baker, & Voas, 2015). 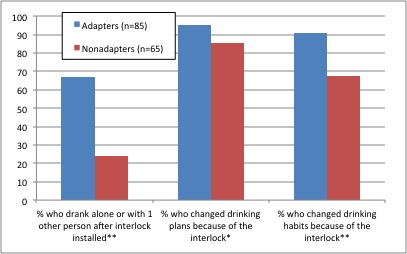 Posted at 01:37 PM in The Drinking Report for Addiction Medicine (DRAM) | Permalink