« The DRAM, Vol. 11(2) - Investigating interlock device compliance: Who gets better and who gets by? | Main | STASH, Vol 11(2) – Automated ASSISTance: Using a computer-based system to screen for substance abuse problems » 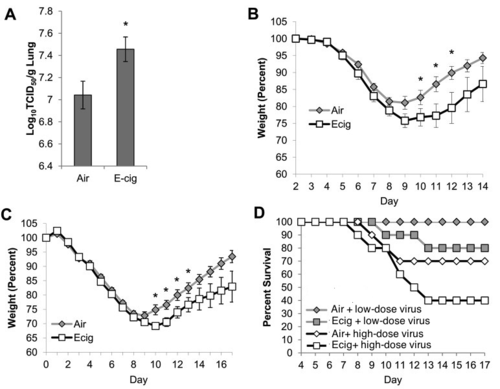 Figure 1. Comparison of Mice in the E-cigarette Condition to Control Mice on Viral Concentration (1A), Morbidity as Measured by Weight Loss (1B and 1C), and Mortality (1D).

This study highlights the potential for e-cigarette vapor to lead to immune deficiency, morbidity, and possibly mortality in an animal model. The results bring into question the safety of e-cigarettes, and the ability to safely use them for nicotine replacement therapy and cessation. These findings suggest that  e-cigarettes must be rigorously tested for safety, and their potential pathways to disease must be more fully understood, before they can be promoted as a safe alternative to smoking.