Extremely brief screens, such as the three-question Brief Biosocial Gambling Screen or BBGS, are an economical way for clinicians to identify patients at risk for addictive behavior. Using longer screens may allow clinicians to differentiate between different levels of risk or test for more risky behaviors. However, due to time and resource constraints, longer screens are infrequently integrated into routine care. One potential solution is to install a computerized system to automate screening. This week, STASH reviews a study that examined the reliability of a computer-based screening system (McNeely et al., 2014). 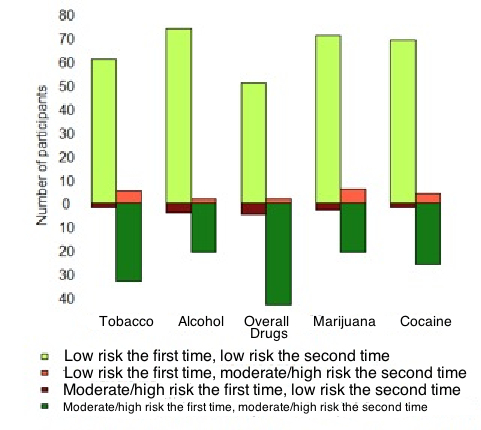 Figure 1: Modified bar chart denoting the number of participants who screened as low risk or moderate/high risk for problems with tobacco, alcohol, drugs overall, marijuana, and cocaine, in their first and second visits using the ACASI-ASSIST. Adapted from McNeely et al. (2014).

So long as they are reliable and valid, self-administered screeners, such as computer- or web-based systems, can save clinicians and support staff time. If patients can complete screeners such as ASSIST before meeting with their doctor, the face-to-face time saved can then be used for more in-depth conversations about any potential health problems and further assessment, when necessary. The end result of this saved time might be better doctor-patient relationships, quicker identification of emerging problems, and better care. Moving screening procedures to computers can sound like a process that would make health care cold and impersonal—almost robotic. However, giving clinicians more time to have important conversations with their patients might give them a chance to do the work that only humans can do.

[i] To test the system on patients who might have difficulties with the computerized system, the RAs oversampled for these criteria: adults with less than a high school education, adults between 50 and 65 years old, and those who primarily spoke Spanish. The RAs also used purposeful sampling to achieve an approximately 1:1 male-to-female participant ratio.