« Have the conversation with those who served. | Main | Compulsive gambling is an illness to which I lost nearly everything. Nearly. »

The DRAM, Vol. 11(3) - Unable or unwilling? Public perception of chemical and behavioral addictions

Mental health disorders, particularly substance-related disorders, are often accompanied by stigma (Crisp, Gelder, Goddard, & Meltzer, 2005). This stigma likely serves as a barrier to treatment for many individuals (Keyes et al., 2010).  People who wouldn’t think twice about seeking treatment for body ailment might struggle alone with the debilitating consequences of addiction. However, researchers and providers have worked to reduce the stigma surrounding mental illness, including addiction. Alcohol and drug use disorders are now viewed by many as disorders with genetic and neurochemical components (Pescosolido et al., 2010). This week, as part of our Special Series on Gambling Disorders, we review an article that investigated whether the shift in views of addiction extends to behavioral addictions such as gambling (Konkoly Thege et al., 2015). 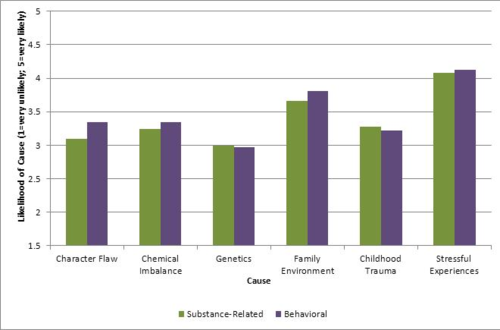 Crisp, A., Gelder, M., Goddard, E., & Meltzer, H. (2005). Stigmatization of people with mental illnesses: A follow-up study within the Changing Minds campaign of the Royal College of Psychiatrists. World Psychiatry, 4(2), 106-113.

This article gives clear idea for report of substance abuse. Sometimes overdose of any drug heavily affects on mind and cause problems of mental health disorder.