« Compulsive gambling is an illness to which I lost nearly everything. Nearly. | Main | Problem gambling: a community perspective »

ASHES, Vol. 11(3) - Up in smoke: How nicotine affects betting behavior

Smoking and alcohol use are commonplace among gamblers and at gambling establishments. Moreover, studies have shown higher rates of tobacco and alcohol dependence among people with gambling problems than in the general population (Petry et al., 2005; Kessler et al., 2008). However, little is known about the direct effects of tobacco and alcohol on gambling behavior. This week, as part of our Special Series on Gambling Disorders, we review an article that investigated the effects of nicotine and alcohol on video-lottery terminal (VLT) gambling behavior (Barrett et al., 2015). 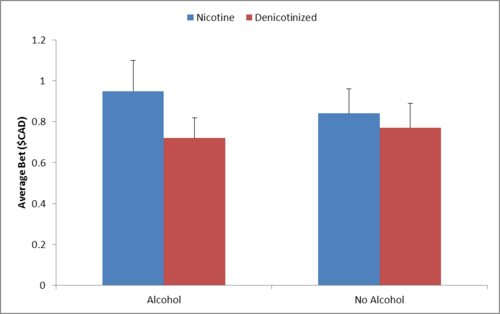 This study reveals that smoking nicotine cigarettes results in larger bets in VLT gambling among smokers who gamble regularly. Because the authors used a placebo smoking condition, their findings suggest that the nicotine in the cigarettes—rather than the behaviors tied with smoking-- is directly responsible for this tendency to bet with higher stakes. However, some of the authors’ previous studies show that acute nicotine administered through other means did not affect VLT gambling (McGrath et al. 20123). This difference could be explained by a lower amount of nicotine delivered via inhalers or by a combination of nicotine effects coupled with the act of smoking. Further research focusing on different methods of nicotine delivery is required to clarify this effect. The current findings suggest that smoking cessation could be an important target for those hoping to reduce their gambling.

1Participants were given approximately one week between sessions. Twelve participants completed all four sessions.

2Denicotinized cigarettes had a maximum of  0.05mg nicotine while normal cigarettes contained an average of 0.60mg nicotine.