« The WAGER, Vol. 20(5) - Continuing validation of the Brief Biosocial Gambling Screen | Main | Introduction to the Special Series on Motherhood and Addiction »

Babies exposed to alcohol in the womb are at risk for having growth defects and neurological problems (e.g., Streissguth, Barr, & Sampson, 1990). Children exposed to alcohol prenatally also begin drinking alcohol earlier than others (Baer, Sampson, Barr, Connor, & Streissguth, 2003). However, the exact pathway between prenatal alcohol exposure and early onset drinking is unclear. It could be that prenatal exposure to alcohol changes children’s sensitivity to alcohol, which might be reflected in perceptions of smell. This week, as part of our Special Series on Motherhood and Addiction, we review a study that investigated how children with prenatal alcohol exposure identify and perceive the odor of alcohol and other substances (Hannigan, Chiodo, Sokol, Janisse, & Delaney-Black, 2015). 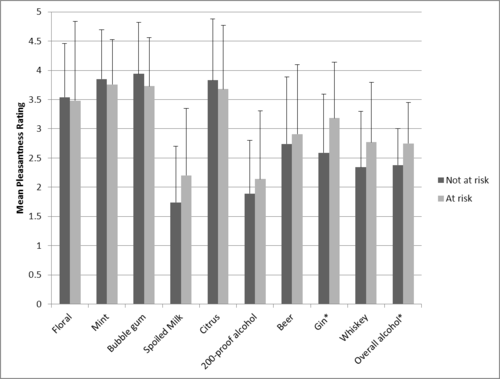 Figure 1. Perceived pleasantness of odors to participants with and without prenatal alcohol exposure (Differences marked with asterisks are statistically significant; Modified from Hannigan et al., 2015.) Click to enlarge.

This study is one of the first to investigate the relationship between prenatal exposure to alcohol and how people experience the smell of alcohol and other odors. The results suggest that individuals who are exposed to alcohol prenatally find alcohol to be more pleasant-smelling than individuals without as much exposure. This is true even when accounting for individuals’ personal drinking habits. These changes in smell could help explain why people exposed to alcohol prenatally begin to drink earlier. Further research is needed to discern the biological mechanisms of these differing responses to alcohol odors.