« ASHES, Vol. 11(5) - Where there’s smoke, risk is higher: Smoking during pregnancy and nicotine dependence in offspring | Main | STASH, Vol. 11(5) – The rise of maternal opioid abuse and its impact on opioid treatment admissions »

Editor’s Note: This Op-Ed/Editorial was written by Udita Iyengar, M.Sc., a PhD candidate at the University College London Department of Psychology. This piece is part of our month-long Special Series on Motherhood and Addiction.

Motherhood is often described as a unique, remarkably challenging and rewarding experience. The maternal brain goes through a series of changes to prepare and assist the mother in adequately and promptly responding to her infant.  In addition, a mother’s own experiences in childhood and relationships with her caregivers may set a template for when she becomes a mother, whereby she may repeat patterns with her own child.

Our work in the Attachment and Neurodevelopmental Laboratory at Baylor College of Medicine in Houston, TX, headed by Dr. Lane Strathearn, aims to explore behavioral, attachment, and neural components of maternal behavior, particularly for mothers with a history of substance abuse.  By exploring a mother’s own experiences in childhood and the relationships with her caregivers, we can understand what factors contribute to her own parenting behavior. To discern the neural component of maternal behavior, we study brain responses of mothers in response to infant cues, such as baby smiles and cries.  Dr. Strathearn’s previous work showed that when mothers see pictures of their own baby smiling or even crying, there is activation of brain regions commonly associated with maternal caregiving, such as the dopamine-related reward pathways1(see Figure 1).  These same dopamine-related reward pathways are commonly activated in drug use2,3, which suggests that drugs may “hijack” the brain circuitry critical for maternal caregiving.  Early childhood trauma and disrupted attachment relationships may also contribute to impaired parenting for mothers with a history of drug abuse.4  Considering these factors, addicted mothers may have more difficulty interacting with and responding to their infants, possibly putting them at a higher risk for child abuse, neglect, and the involvement of child protection services. 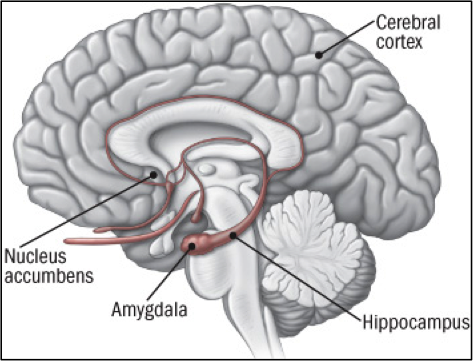 For the last five years, I have coordinated a NIH-funded dual-site study between Baylor College of Medicine and Yale University, including exploring maternal brain and behavioral response to infant cues in addicted mothers.  In this study, we enroll mothers from a treatment program for substance abuse, where they reside with their infants. We explore their own early relationships based on the Adult Attachment Interview, which yields an attachment classification (for example, secure or insecure attachment), as well as whether the individual has unresolved trauma (meaning they have not adequately processed a past traumatic event such as childhood abuse or neglect).   We also observe mothers’ interactions with their infants in the form of free-play, which will be later coded for maternal behavioral sensitivity and child responsiveness. Lastly, we show mothers images of their own and an unknown baby, both happy (smiling images), and in distress (sad images) when in a functional MRI machine, to understand brain response in response to infant cues.

Our preliminary findings show that mothers without addiction see the faces of their own smiling babies as a pleasurable reward, the way others might see Oreo cookies or even cocaine. We know this because we looked at brain activation in response to mothers’ own babies and compared that against activation in response to unknown babies, as shown in Figure 2. The activation was in oxytocin- and dopamine-related brain regions implicated in maternal caregiving behavior (including the hypothalamus, ventral striatum, and ventromedial prefrontal cortex).5 On the other hand, we found that mothers with addiction had a reversal of this pattern: they had less activation in these regions when seeing their own smiling babies, compared with unknown babies. We need to learn how this affects maternal caregiving. 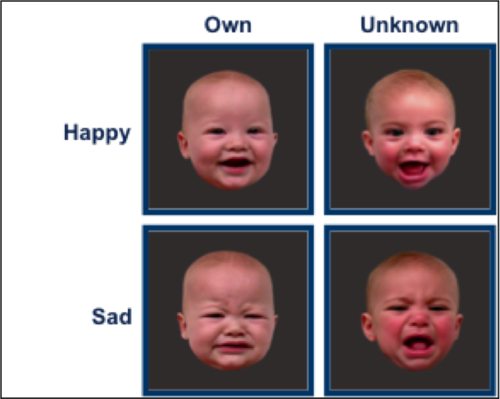 My own interest in working with mothers and infants likely stems from my own positive experiences in childhood, coupled with my interest in neuroscience.  Working alongside a population of mothers with addiction problems has been an incredible opportunity to really understand the complexities that adverse life experiences brings, and the struggles that mothers face when trying to break a cycle of addiction.  I have learned from mothers both with and without addiction problems, that many complicated factors contribute to a mother’s attachment patterns and drug use. Many mothers in our study were exposed to drugs at an early age or had caregivers who abused drugs themselves, and were subjected to childhood traumas such as sexual abuse, physical violence, and emotional and physical neglect. They often express wanting to create a safer and better environment for their own children, yet fall into the pattern of drug abuse and lose their children to child protective services. The stigma of addiction is especially harsh for mothers, but my own experiences working with this population has shown me that despite their challenges, many mothers are still doing their best to be good parents, and are attempting to break the cycle of their own drug use.

One of the most rewarding aspects of working on this study has been the outreach activities that we have organized with the residential treatment center. Our research lab holds a holiday toy drive every year to collect gifts for the children at the center, which we present to them at a Christmas Party. The Yale Club of Houston has also partnered with our lab to hold activity fairs and arts and craft parties, which bring so much joy to the mothers and their children at the center. I would encourage anyone working with individuals in treatment for drug abuse to also find ways to create engaging and interactive teaching tools, in areas that may be of interest. Many mothers in our research study have expressed a desire to become more educated on the impact of their drug use on their own relationships with their children. In the future, I would like to create an educational “baby and brain” parenting workshop series, to help mothers engage and stimulate their infants’ development, as well as learn how drugs may impact their own behavior and response.

In addressing a complex issue such as maternal substance abuse, a multi-faceted approach is required to develop interventions and treatment strategies for mothers who struggle with addiction. Ultimately, our hope is to better understand the roots of maternal addiction and help prevent its intergenerational transmission, so that mothers can raise healthy and happy children.  In honor of Mother’s Day this month, this quote by Lin Yutang seemed especially sound: “Of all the rights of woman, the greatest is to be a mother.”

Udita Iyengar is a current PhD student at the University College London Department of Psychology along with conducting the study on maternal brain and behavioral response at Baylor College of Medicine. Ms. Iyengar is also a trained assessor and coder of the Adult Attachment Interview using the Dynamic Maturational Model of Attachment and Adaptation.  She received her Masters of Science in Developmental Neuroscience from University College London and Yale University.

Fascinating work, and such a clear, succinct explanation of what you do! And a terrific sentiment to end on as well.

Fascinating article. Having worked with drug dependent mothers myself, I think any research into this field is always welcome, and hope we develop some interventional and management strategies to try and avoid this cycle of drug abuse.
Well written by author.