STASH, Vol. 11(5) – The rise of maternal opioid abuse and its impact on opioid treatment admissions

During the past decade, there has been a significant increase in maternal opioid abuse and neonatal abstinence syndrome (Pan & Yi, 2013; Patrick et al., 2012). However, researchers have not examined how these changes have impacted opioid treatment admissions among pregnant women. This week’s STASH reviews a study of recent (1992-2010) trends in treatment admissions for prescription opioid abuse during pregnancy (Martin, Longinaker, & Terplan, 2015), as part of our Special Series on Motherhood and Addiction. 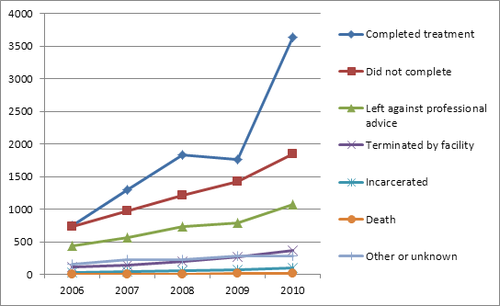 Figure 1. Treatment completion status of prescription opioid treatment discharges among pregnant women, TEDS-D 2006-2010 (adapted from Martin, et al., 2015). Note. Categories including left against professional advice, terminated by facility, incarcerated, death, other or unknown, are subsets of the category “did not complete.”

Opioid abuse among women of reproductive age continues to increase; therefore, it is important to identify risk factors and target prevention and intervention programs toward those most at-risk. Doing so could increase the utilization of medication-assisted therapies to improve maternal medical status, and decrease fetal morbidity. Further research is needed to provide a better understanding of why some pregnant women are at a higher risk than others at the local, regional, and national levels.