« Introduction to the Special Series on Fatherhood and Addiction | Main | STASH, Vol. 11(6) – My father’s father: Multi-generational substance use behavior outcomes »

Children whose mothers smoked during pregnancy are at higher risk for attention deficit hyperactivity disorder (ADHD) (see Langley, Rice, van den Bree, & Thapar, 2005 for a review). However, studies that examine prenatal exposure to substances and child outcomes often fail to account for other factors that might differ between families and account for those associations. In this week’s ASHES, as part of our Special Series on Fatherhood and Addiction, we review a study that examined whether the apparent association between prenatal exposure to nicotine and child ADHD can be explained in part by fathers’ smoking behaviors (Langley, Heron, Smith, & Thapar, 2012). 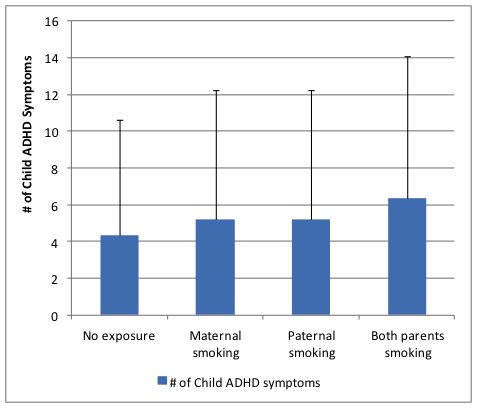 The results suggest that the relationship between maternal smoking during pregnancy and child ADHD might not be due to actual pre-natal exposure effects. Instead, the observed association might be due to a combination of genetic and environmental factors, for which both mothers’ and fathers’ smoking serve as proxies. It is important to note that there are many studies, such as the one reviewed in the last ASHES, that do find evidence that maternal smoking during pregnancy likely has direct effects on the fetus, so this study should in no way be used to argue that mothers can smoke during pregnancy without doing harm to their babies. Instead, the study suggests that we ought to focus more attention on the entire family environment during pregnancy and childhood and potential risk factors that emerge for children who grow up in smoking households.