« The WAGER, Vol. 20(6) – The ties that bind: Parent-child bonds among pathological gamblers and matched controls | Main | Introduction to the Special Series on Fatherhood and Addiction »

The DRAM, Vol. 11(6) – Stuff my dad says: Parents, their views of underage drinking, and their children’s choices

In a 1980s anti-drug PSA, a father confronts his teenage son about a box of drug paraphernalia found in the boy’s closet. The father asks, “Who taught you how to do this stuff?” The boy’s response is the big reveal. “You, all right? I learned it by watching you!” The last line comes from an off-camera narrator: “Parents who use drugs have children who use drugs.” Indeed,  for many kinds of activities, parents who are involved tend to have children who are involved  (e.g., sports: Shakib, 2004, smoking: Green et al., 1991). In this week’s DRAM, to open our Special Series on Fatherhood and Addiction, we summarize a recent study that explored how mothers’ and fathers’ drinking habits and attitudes shape their children’s drinking behavior (Hung et al., 2015). 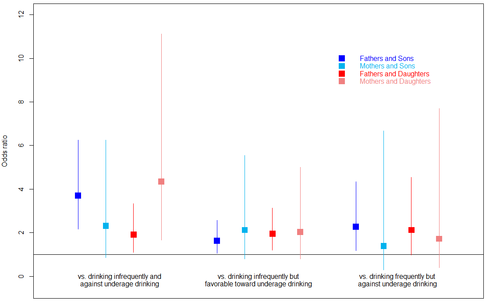 The musical (and movie) Into the Woods ends with the warning, “Careful the things you say. Children will listen. Careful the things you do. Children will see and learn.” There seems to be some wisdom in these words: in this study, children were at higher risk for drinking if their parents—especially their dads—drank frequently and endorsed underage drinking. Mothers’ drinking habits and attitudes seemed to have much less of an effect on their children’s drinking, especially sons. Among all children whose fathers were favorable toward underage drinking, those whose fathers drank infrequently tended to be at lower risk for underage drinking. Parents’ actions spoke louder than their words. It would be interesting to replicate this study in other countries, to see if the differences in fathers’ and mothers’ influences are Taiwanese-culture specific or more universal, and to see if actions still count more than words.