Alcohol and drug abuse affects families in many ways. For example, The BASIS previously reported that there is a relationship between pre-natal smoking and ADHD in children, parental drinking behavior is associated with child alcohol consumption, and pre-natal alcohol exposure relates to children’s future alcohol sensitivity. This week, for our special series on Fatherhood and Addiction, we review research that examines fatherhood roles and addictive behavior among young Native American dads (Neault et al., 2012). 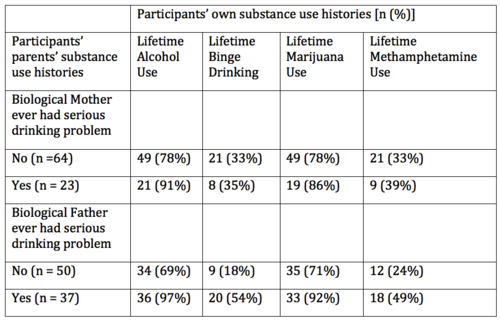 Research suggests that Native American families’ struggles with harmful behaviors, like substance abuse, could relate to the experience of intergenerational trauma (e.g., Evens-Campbell, 2008). This research suggests that fathers’ substance use patterns affect their children’s own substance use behavior, as well as their children’s parenting behavior. As we gain more insight into the multi-generational affects of substance abuse that are universal and culturally specific, we will be able to build targeted prevention and intervention programs.

Posted at 02:01 PM in Science Threads on Addiction, Substance Use, and Health (STASH), Special Series | Permalink