Globally, countries such as Australia, Canada, the US, and much of Western Europe have experienced large increases in the rates of per capita opioid usage. Increased prescribing of opioids provides relief to those who suffer from chronic pain, but not without an unintentional increase in the morbidity and mortality associated with opioid abuse. According to the latest national figures during 2013, 1.9 million people in the US were abusing prescription opioids and 16,235 people died from an opioid overdose. Recently, states such as Massachusetts have announced comprehensive plans to address opioid abuse.  This week’s STASH describes a recent review of Washington State’s collaborative effort to address opioid abuse (Franklin et al., 2015). 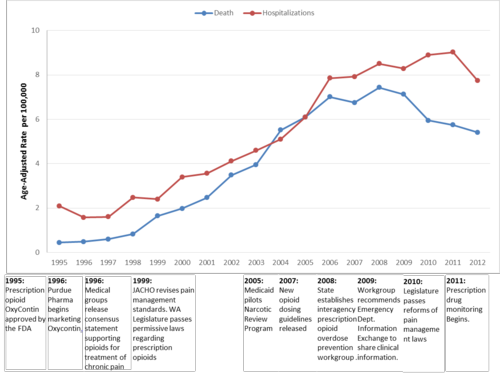 The results of this review suggest that Washington State has begun to stem the tide in its effort to address opioid overdoses. As more jurisdictions begin addressing opioid abuse in their region, it is important to look to the success and barriers that other areas have experienced. This review of the experiences in Washington is an important step in developing a comprehensive evidence based approach to addressing opioid abuse. Future efforts should look at how individuals abusing opioids are being impacted by the efforts recommended here and how successful they are in recovery.

Posted at 01:00 PM in Science Threads on Addiction, Substance Use, and Health (STASH) | Permalink