« STASH Vol. 11(7) - Just what the doctor ordered: Washington State’s comprehensive approach to opioid epidemic sees results. | Main | The DRAM Vol. 11(8): How high? The prevalence and comorbidity of newly-defined alcohol use disorders in the general population »

The WAGER, Vol. 20(8) – We have a new challenger: Gambling habits of video game players

From the design of games to the people who play them, there is important overlap between video gaming and gambling. At least as far back as the 80’s (e.g., Super Mario Bros. 2 in 1988), game designers have used gambling mechanics such as slot machines and card games, to give players extra resources and help them progress through the story. More recently, on streaming sites such as Twitch.tv, viewers are watching video game players dabble in online gambling, and online poker services and professional gamblers are broadcasting footage of poker tables and tournaments. This week, the WAGER reviews a study that explores whether video game players who have problems with their video gaming gamble more than those who do not have problems with their video gaming (Forrest et al., 2015).

Figure 1: Mean numbers of occasions of gambling over the three month period, for non-problem and problem video gamers. The vertical line shows the sizes of the standard deviations. 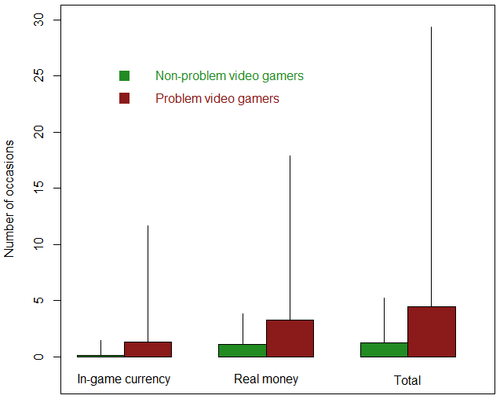 In this study, Forrest and his colleagues did not observe any overall association between problem video game playing and frequency of gambling behavior. However, it is still possible that there might be associations within subgroups of video game players (e.g., competitive players versus noncompetitive players, specialists in one genre of games or another). Astute fans of certain card and puzzle games, for example, are likely better able to recognize situations where the effects of skill end and blind luck determines victory and defeat. Such people will probably be less likely to gravitate towards or have problems with games of pure chance such as slots, roulette, or bingo. Research into the overlap between the video game playing community and the gambling community is still in its early stages.

Posted at 12:01 PM in The Worldwide Addiction Gambling Education Report (The WAGER) | Permalink