Alcohol use, specifically risky drinking, has been a public health concern on college campuses for many years. Previous research has suggested that college athletic involvement is associated with an increased likelihood of alcohol consumption (Leichliter et al, 1998). This week, as part of our Special Series on Addiction and Sports,The DRAM explores ta study that examined the progression of alcohol consumption and alcohol-related problems and how it relates to athletic participation (Cadigan et al., 2013).

Figure 1: Mean changes in alcohol outcomes for athletes and nonathletes (reproduced with permission from Alcohol Research Documentation, Inc., publisher of the Journal of Studies on Alcohol and Drugs (www.jsad.com)) 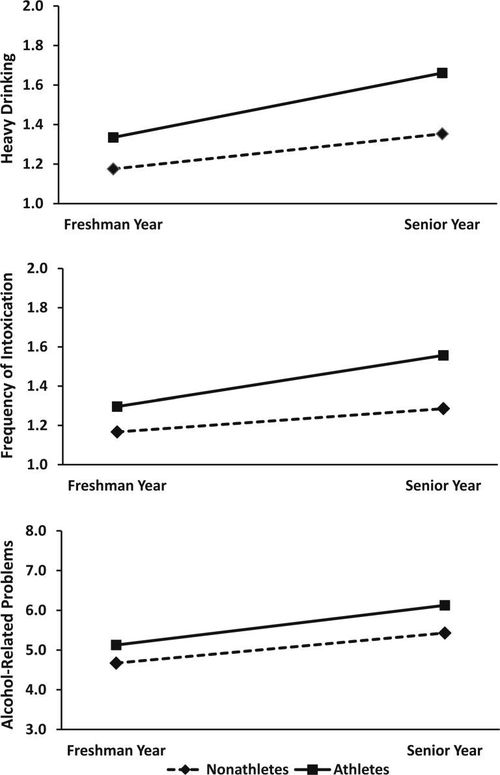 This research suggests that involvement in college athletics is associated with higher levels of risky drinking. Athletes also experience a sharper increase in risky drinking from freshman year to senior year, particularly consistent athletes and those who start participating in college athletics after their freshman year. Sports-related anxiety and a culture of alcohol or pressure from teammates might contribute to higher rates of risky drinking. As a result, athletes might benefit from specialized education efforts from their athletic departments (e.g. alcohol culture in athletics or how alcohol consumption can affect athletic performance). This will likely be more effective than a generalized alcohol education effort given to all students.