« The DRAM, Vol. 11(10) – Energy drinks mixed with alcohol: Are students motivated to drink more? | Main | Introduction to the Special Series on Addiction Treatment within Correctional Facilities »

Anti-smoking efforts on college campuses commonly highlight the negative health effects associated with smoking and the need to reject social pressures to smoke. College students experiencing PTSD symptoms might need special attention, because people who have experienced trauma tend to be more likely to smoke (Roberts et al., 2008). In this week’s ASHES, we review a study that explores whether PTSD symptoms mediate the relationship between trauma exposure and smoking among college students (Gabert-Quilen et al., 2014). 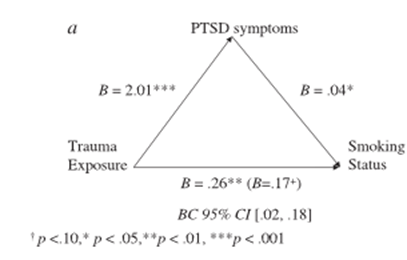 The current study shows that the relationship between past trauma exposure and college student smoking is mediated by PTSD symptoms, specifically hyperarousal symptoms. This finding contributes to previous research suggesting that smoking is used as a form of coping with hyperarousal and PTSD symptoms, and extends that research to college students. Treatment of to PTSD symptoms, specifically hyperarousal symptoms, could increase the efficacy of campus smoking interventions. Further research should examine these relationships across time and test whether interventions that target coping skills can reduce these associations among college smokers with previous trauma exposure.