« Why police are putting people in treatment instead of jail | Main | Can time behind bars save your life? »

Incarcerated people in the United States experience a host of poor health outcomes, such as chronic diseases including addiction and mental illness. The rate of tobacco use in particular, which is triple that of the general population, is a major public health concern for the criminal justice system (Vaughn & del Carmen, 1993). Because of the well-documented negative health consequences of smoking, administrators have prohibited tobacco sales and use in a majority of US correctional facilities. In this week’s ASHES, as part of our Special Series on Addiction within Correctional Facilities, we review a study by Dickert and colleagues that examined the impact on inmate mortality rates of a reduction and eventual ban of tobacco products in the New Jersey Department of Corrections (NJDOC).

Figure 1: The mortality rates of the total NJDOC population and those classified as having or not having special MH needs over the course of a reduction and eventual elimination of tobacco sales and use (adapted from Dickert et al., 2015). 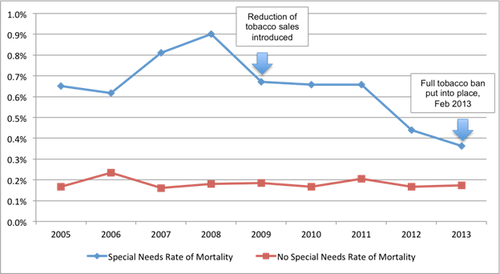 A reduction and eventual ban of tobacco sales and use was correlated with a 48% reduction in mortality among inmates with special needs for mental health care. These mortality rates declined across time despite the aging population of NJDOC inmates (7.4% to 13.8% of the population was 50+ from 2005 to 2013). While the majority of correctional facilities in the country have implemented smoke-free policies, these findings might provide additional incentive for the few institutions that have not adopted these policies. It is also possible these findings could spur tobacco-free policies in other settings that serve a sub-population with mental illness, such as out-patient or in-patient substance use and mental health treatment.