« Introduction to the Special Series on Addiction Treatment within Correctional Facilities | Main | The WAGER, Vol. 20(11) – From DSM-IV to DSM-5: Effects on the diagnosis of Gambling Disorder among incarcerated people »

STASH Vol. 11(10) – Racial and ethnic parity for prisoners in need of treatment

In the United States, people of color are less likely to access effective treatment for psychiatric disorders, including substance use disorders, than whites (Jacobson et al., 2007). A meaningful number of inmates in state correctional facilities have a substance use disorder; therefore, it is important to discover what treatment engagement disparities might exist among incarcerated people. In this week’s STASH, as part of our Special Series on Addiction within Correctional Facilities, we review a study that explores the racial and ethnic disparities in the treatment for drug dependent inmates in U.S. state correctional facilities (Nowotny, 2015). 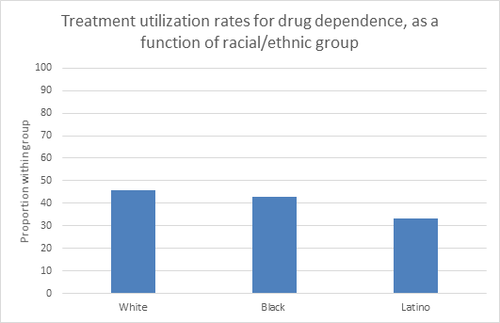 The current study shows relatively low rates of drug dependence treatment among Latino inmates in U.S. State correctional facilities. Even among white and black inmates, fewer than half of inmates reported receiving necessary treatment for their substance use disorder, and even fewer reported receiving evidence-based and humane treatment options including detox and maintenance medication. Additionally, it indicates that there is a relationship between treatment use and external social support. Future research could explore how prison-based treatment plans might incorporate external social support to increase participation and improve treatment outcome. Effective treatment for substance use disorders and other psychiatric conditions might reduce subsequent relapse and criminal recidivism, in addition to improving overall quality of life. Therefore, future research should collect more detailed information about the reasons of treatment use disparities.

Posted at 03:45 PM in Science Threads on Addiction, Substance Use, and Health (STASH), Special Series | Permalink