« Substance abuse disorder treatment in the criminal justice system: a front-line perspective | Main | Why police are putting people in treatment instead of jail »

The DRAM, Vol. 11(11) – Identifying prisoners in need of treatment for alcohol use disorders

Earlier in this Special Series, we have noted the lack of evidence-based treatment services for incarcerated people experiencing substance use disorders (SUD). When administrators at jails and prisons do decide to provide access to SUD treatment services, they must find a way to identify which prisoners need and will respond to these services. Today, The DRAM reports on a study that evaluated standard practices for identifying incarcerated people with SUD treatment needs (Kissell et al., 2014).

Figure 1. Patterns of responses to the question Do you think you had a problem with alcohol when you came into prison? as a function of AUDIT category 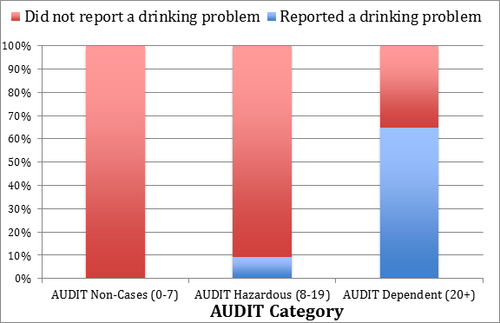 This study suggests that incarcerated people need to complete validated, standardized tools in order for staff to identify those who need help for drinking problems. Fully one third of participants who were dependent on alcohol (according to the AUDIT) did not report having a problem; nearly all of hazardous drinkers failed to report having a problem. Perhaps as a result, only a minority of prisoners with alcohol problems received counseling, assessment, and referral services. Administrators at correctional facilities must deploy more resources to identify and respond to the need for high-quality substance abuse treatment.