The WAGER, Vol. 20(11) – From DSM-IV to DSM-5: Effects on the diagnosis of Gambling Disorder among incarcerated people

The American Psychiatric Association’s (2013) fifth edition of the Diagnostic and Statistical Manual (DSM-5) suggests a variety of changes for the way professionals diagnose Gambling Disorder (GD). For instance, the scoring threshold for GD has been cut from 5 to 4, and one of the ten criteria, “illegal acts,”1 has been eliminated. This week, as a part of our Special Series on Addiction Treatment in Correctional Facilities, The WAGER reviews a study that examined the impact of these changes on diagnostic criteria upon diagnosis patterns amongst incarcerated people (Turner, Stinchfield, McCready, McAvoy, & Ferentzy, 2015).

Figure 1: Proportion of participants at each Gambling Disorder scoring level, with and without the illegal acts criterion 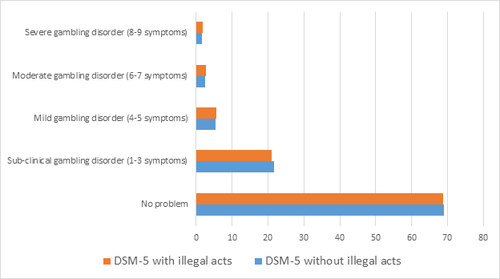 The results indicate that the changes in the diagnostic criteria of GD might affect rates of diagnosis among incarcerated people. When the illegal act criterion was removed, the number of offenders identified with gambling disorder decreased slightly; this might represent misdiagnosis/false negatives. However, the reduction of the cut point from 5 to 4 symptoms increased the rate of diagnosis. In summary, the authors suggest that researchers and clinicians interested in diagnosing GD among incarcerated people use the DSM-5 criteria but subsume illegal acts into another criterion, “lying to others.”

[1] The illegal acts criterion states, “have committed illegal acts such as forgery, fraud, theft or other embezzlement in order to finance your gambling”