Policies that restrict access to alcohol have the potential to dissuade risky drinking and related negative consequences. One recent study found US jurisdictions did not increase implementation of the most effective policies from 1999 to 2011. This week, The DRAM explores how alcohol control policies might affect rates of binge drinking (Xuan et al., 2014).

Figure 1. Odds Ratio and 95% Confidence Interval for the Association Between Binge Drinking and an 10 Point Increase in a State’s Absolute APS Score (Modified from Xuan et al., 2014). 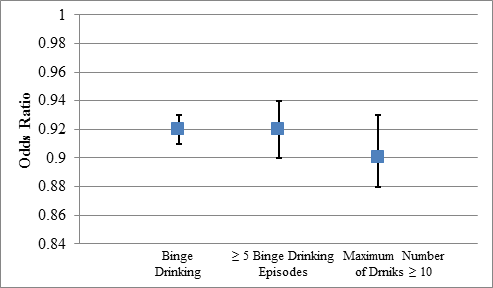 This study is important because it is the first to measure the association between state-level alcohol control policies and individual level binge drinking behavior. The results are encouraging: when states implemented efficacious policies, their residents were at lower risk for binge drinking. Although much works remains to understand the proper composition of policies that both protect the most people while doing the least amount of harm, this study does provide support to policy makers interested in implementing more effective policies to curb problem drinking and addiction.

Posted at 01:00 PM in The Drinking Report for Addiction Medicine (DRAM) | Permalink