« Introduction to the Special Series on Driving under the Influence (DUI) | Main | A reflection on our efforts during 2015: Top 10 most read BASIS posts »

The WAGER, Vol. 20(13) – Driving under the influence: A dangerous gamble

People who decide to drive under the influence of intoxicants (DUI) risk hurting themselves or others. DUI clearly represents poor decision-making. Although it might seem logical that all DUI offenders struggle to make good decisions, some might be especially impaired in this area. If so, they might benefit from treatment that specifically targets this limitation so that they do not keep reoffending. This week, as part of our Special Series on Driving under the Influence, The WAGER examines whether DUI offenders with impaired decision making skills are especially likely to drink heavily and re-offend (Bouchard et al., 2012). 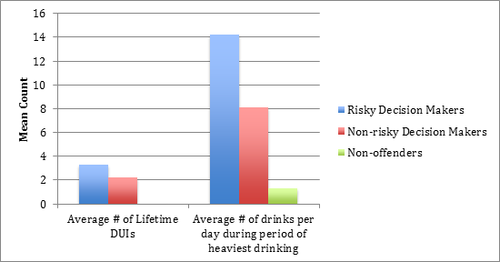