« Op-ed/Editorial: New resolutions to mark our 20th year | Main | The DRAM Vol. 12(1) – The use of naltrexone in treating heavy drinking among young adults »

The researchers analyzed data from the National Epidemiologic Survey of Alcohol and Related Conditions (NESARC). Wilson and her colleagues used logistic regression to study whether different generations (i.e., first-, second, and third-generation) were more or less likely to report problem gambling behaviors. These analyses took into account factors like age, gender, household income, and other demographics.

Both second- and third-generation immigrants were more likely than first generation immigrants to report (1) tolerance (i.e., needing to increase the amount of money they gamble to keep it exciting), (2) spending a lot of time thinking about times when they won or lost, (3) spending a lot of time gambling, planning bets, or studying the odds, and (4) needing to gamble again as soon as possible after winning or losing. Figure 1 illustrates these findings.

Immigrant community groups should raise awareness and teach their members about gambling-related problems. That way, if gambling does become an issue with an immigrant’s child or grandchild, they might recognize the problems and act before it creates serious problems.

One limitation is that the study didn’t take immigrant family culture into account, even though gambling is more common or acceptable in some cultures than others. When looking at these four signs of gambling related problems, the researchers also did not consider “1.5-generation immigrants.” These are people who came to the U.S. very young (for example, five years old), and spent significant time growing up in American culture and attending American schools. Technically, they’d be classified as first-generation, but they might have more in common with second-generation immigrants. 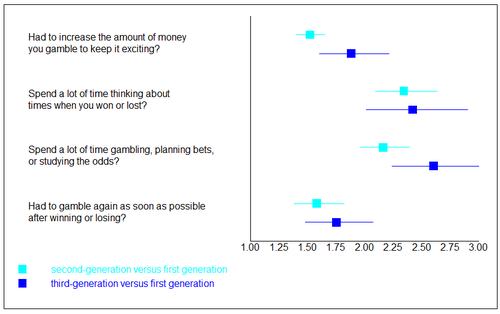 Most states have a toll-free number people can call if they feel that they have problems with gambling. People can also find more information at the National Center for Responsible Gambling’s website.

[1] Here are some example studies.

Posted at 12:30 PM in The Worldwide Addiction Gambling Education Report (The WAGER) | Permalink