« ASHES, Vol. 12(4) – Clearing the air: Exploring patterns of tobacco use among Southern California youth | Main | The WAGER, Vol. 21(5) – Alcohol use and suicidal ideation among gamblers »

Editor’s note: As part of our broader effort to streamline our science reviews, we have changed the way we provide citations to academic papers. Rather than presenting a list of references at the end of science reviews, we now link directly to published abstracts of these papers within the main text. Readers can click on these links to learn more details about the papers.

People use marijuana for a lot of different reasons. Marijuana might be a pathway to fun or a quick escape; a medication to relieve pain (either physical or emotional); a prop or symbol of membership in a social circle or group of friends; or something else entirely. But, do the reasons someone uses marijuana relate to their experiences with it? Claire Blevins and her colleagues recently surveyed a group of teenage marijuana users to look for links between reasons for using and negative consequences.

Are some reasons for using marijuana more likely to be associated with negative consequences of marijuana use?

The researchers surveyed 9th, 10th, and 11th graders from six public high schools in Seattle, Washington who had used marijuana in the previous 30 days (n = 252). The students completed the Comprehensive Marijuana Motives Questionnaire (CMMQ), giving their reasons for using. They also completed the Marijuana Problems Index (MPI), to measure the negative effects of their marijuana use (e.g., neglecting responsibilities, feeling withdrawal symptoms, getting into arguments about one’s marijuana use). The researchers used multiple linear regression to determine which categories of reasons were associated with more negative consequences.

The Substance Abuse and Mental Health Services Administration estimates that 2.7% of American teens—about 667,000—have a marijuana use disorder. Clinicians, friends, and family members who want to encourage a marijuana user to make positive change might want to tailor their message to the person’s reason(s) for use. For example, if conformity and peer pressure are the issues, then perhaps the best approach is finding different social circles or friends. If marijuana use is about coping with problems, then equipping the person with better coping strategies might help. If it’s a question of boredom or lack of direction, then the task could be to find a new hobby or activity of interest.

One limitation is that the study relied on teenagers to self-report their past reasons and past consequences of marijuana use. Their answers might not accurately reflect their true reasons, or they might have misremembered past incidents or consequences of their marijuana use. Second, the sample might not have been representative of all marijuana-using teens. Participation was voluntary, and users with some reasons for using marijuana might have been more inclined to participate than users with others. Third, the reasons associated with harmful outcomes could be different for teens and adults.

Figure 1. Twelve categories for using marijuana, based on the Comprehensive Marijuana Motives Questionnaire (CMMQ). The figure shows the items on the CMMQ corresponding to the categories of conformity, coping, and boredom, which were associated with negative consequences. Categories of reasons in green were not significantly associated with negative consequences. Adapted from Blevins et al. (2016). 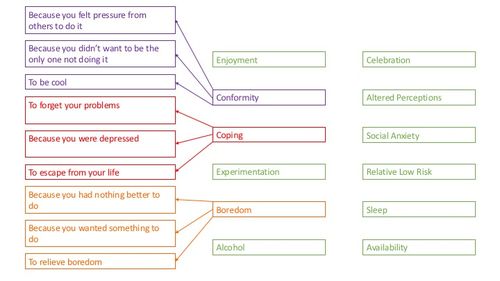 The National Institute on Drug Abuse has a website dedicated to the treatment of marijuana abuse.

Posted at 09:30 AM in Science Threads on Addiction, Substance Use, and Health (STASH) | Permalink