The DRAM, Vol. 12(7) – But what do THEY think? Social norms about college drinking

Social norms are rules and ideas that describe what people consider acceptable and unacceptable behavior. Some norms are injunctive norms – perceptions of what other people approve and disapprove of. Others are descriptive norms – perceptions of what people actually do. Over the past few years, researchers have been looking for ways to change college students’ social norms about alcohol use. The theory is that if we change college students’ injunctive or descriptive norms, we can cut the risk of binge drinking. This week, The DRAM reviews a study by Jennifer Merrill and her colleagues that polled college students on their interest in, and receptiveness, to injunctive norms that promote moderate and controlled drinking.

Are college students interested in what their peers think about alcohol use and overuse?

Merrill and her colleagues used an online survey company to recruit 221 young adult drinkers attending college. They assigned each of these participants one of four sets of statements on injunctive norms about drinking (see Figure 1 for sample items from each of the sets). Each participant rated how interesting they found the information in each of their assigned eleven statements. The participants also completed the AUDIT, a survey that assesses risk for harmful alcohol use and any resulting consequences. Merrill and her colleagues then looked at the correlations between the participants’ AUDIT scores and their interest in the statements on injunctive norms.

On average, across all four sets of statements, the participants reported finding the statements moderately interesting. Those who reported higher AUDIT scores, particularly higher scores on alcohol use consequence items, showed more interest in the statements.

Colleges and universities continue to develop and modify their alcohol awareness programs. One important aspect of the design process is finding statements that will grab students’ interest. Many PSAs about drinking and drug use address the potential consequences of use or misuse. These PSAs hope to affect behavior by tapping into fears about negative outcomes. Statements about injunctive norms (e.g., more than 9 out of 10 college students find it attractive when someone stops drinking before becoming sloppy) represent a different tack. Perhaps by tapping into students’ sense of peer pressure and needing to fit in, schools might be able to decrease harmful drinking. In particular, participants who reported more consequences of their past alcohol use were the ones who reported more interest in their peers’ opinions. This suggests that a norm-based awareness campaign might be particularly effective for these at-risk drinkers.

The study was based on an online survey with a small sample size. Regions and schools should test the statements on their own student populations to see what works on their own campuses. The participants were also not asked about their interest in descriptive norms (e.g., that about 25% of college students reported academic consequences – like doing poorly on exams – as a result of drinking). So, the researchers could not determine whether or not the participants would be more interested in statements about injunctive norms like the ones they presented or to other statements about college drinking. The study also did not explore possible reasons that those with higher AUDIT scores reported more interest in the injunctive norms they were presented.

Figure 1. Sample items from each of the four sets of statements on injunctive norms, with means and standard deviations for the participants’ responses. Adapted from Merrill et al. (2016). Click image to enlarge 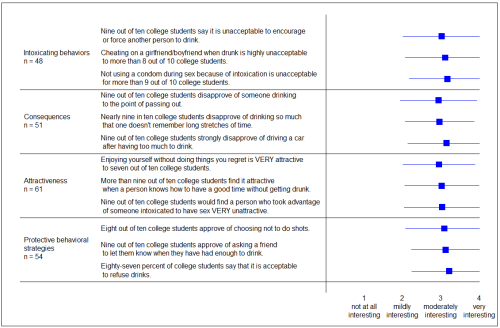 The National Institute on Alcohol Abuse and Alcoholism has a webpage devoted to college drinking.

Posted at 09:23 AM in The Drinking Report for Addiction Medicine (DRAM) | Permalink