Almost everyone has experienced some sort of craving in their lifetime. In the world of research, cravings are frequently studied in relation to addictive behavior like drug use; however, it is still unclear how cravings emerge. This week, ASHES reviews a study by Michael Sayette and John Dimoff that looked at whether people experience smoking cues differently depending on whether they are trying to quit and whether they think they will be allowed to smoke.

Do participants who expect to smoke soon find smoking stimuli more attractive than those who are not expecting to smoke?

Researchers recruited 277 current smokers from two populations. They recruited about half (120) from a hospital smoking clinic and put them in the motivation to seek treatment (MST) group. They recruited the other 107 through newspaper advertisements and placed them in the currently not interested in quitting (CNI) group. Half of all participants were told they would have the opportunity to smoke during the experiment, and half were told they would not. Participants then completed a series of tasks which included, among others, describing their smoking urges and feeling states and viewing and rating smoking/alcohol related images. After completing all tasks, the participants who were told they could smoke were allowed to do so.

Those in the CNI group who were allowed to smoke found the images of smoking more pleasant than participants in the other three groups. This suggests that smoking cues themselves can become attractive or pleasant to smokers who anticipate smoking soon, but only if they aren’t trying to quit (see Figure 1).

A limitation to this study is that it is done in a laboratory setting. Cravings and moments of anticipation might occur differently in a natural environment, so it is hard to tell whether the participant is acting or feeling as they would without the knowledge of being a part of an experiment. 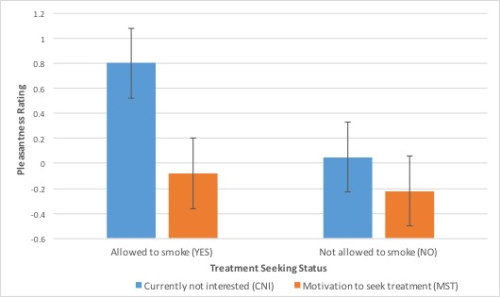 If you or a loved one has a desire to quit smoking visit our first steps to change here.

Also visit à  https://smokefree.gov/ for resources like: ways to deal with daily challenges, quitting methods to practice, making a quit plan, and 24/7 support available on your mobile device.