Editor’s Note: We’re proud to announce that Dr. Jim O’Connell will speak on the topic of “Treating Addiction with Humility and Respect: Lessons Learned Providing Care at the Edge of Society” at this fall’s Addiction Medicine continuing medical education course, presented by the Division on Addiction through Harvard Medical School. In today’s article, we review research from Dr. O’Connell and his colleagues at the Boston Health Care for the Homeless program.

People experiencing homelessness are more likely to die than people of the same age, and even income status, who have stable housing.  Some of this mortality gap might be due to higher prevalence of cigarette smoking and alcohol and substance use disorders among homeless individuals. Substance use can cause death not only through overdose but also through serious illnesses like HIV, Hepatitis C, cancer, and more. In this week’s STASH, we review a study by Travis Baggett and his colleagues that examined health records of patients at the Boston Health Care for the Homeless Program (BHCHP) to calculate the portion of all deaths that could be attributed to drug use.

What proportion of fatalities in the Boston-area homeless community can be attributed to drug use, and how do these rates compare to the general population?

Baggett and his colleagues determined the cause of death for 1,302 adults who visited BHCHP between 2003-2008 and subsequently died.[1] For each cause of death included in the sample, the researchers used general population data to determine approximately what proportion of deaths with that cause were also influenced by substance use—from 25% (e.g., HIV) to 100% (e.g., accidental drug poisoning).  They used these rates to calculate how many deaths in the study population were caused by substance use.[2] They did the same for a sample from the Massachusetts general population.

Among adults experiencing homelessness, approximately 22% of all deaths could be attributed to using drugs other than tobacco or alcohol. Approximately 53% of all deaths were attributable to using any of these substances (see Figure 1). Accidental drug poisoning, alcohol use disorder, and cancer were frequent causes of death. Tobacco-, alcohol-, and drug-attributable mortality rates were 3.2-17.4 times higher than the general Massachusetts population and varied based on age and gender.

Drug-attributable deaths contribute significantly to the overall increased mortality rate for people experiencing homelessness. Increasing access to addiction treatment and behavioral health services might improve lives, cut deaths, and reduce these discrepancies. The relationship between substance use and homelessness status is complicated, however, and previous research indicates that substance use may both predict homelessness and develop as a result of homelessness. Connecting homeless individuals with housing support, benefits enrollment, and treatment for non-drug-attributable illness will also be necessary to ensure the success of addiction treatment.

The sample included homeless individuals in the Boston area who were able to access BHCHP services. Therefore, these results may not be applicable to homeless individuals in rural areas or cities with less accessible health care directed at homeless populations. Also, the researchers had to do a bit of guesswork to determine the probability that a given cause of death was attributable to substance use.

Figure 1: The percentage of substance-attributable deaths for homeless individuals. Click image to enlarge 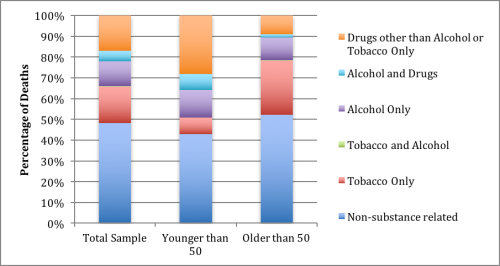 For more information about the Boston Health for the Homeless Program or contact information for services in your area, click here.

[1] The researchers used the International Statistical Classification of Diseases and Related Health Problems, 10th Revision (ICD-10) code listed on the death certificate to classify cause of death.

[2] For example, researchers recorded 76 deaths as a result of HIV during the study period. After using previous data to estimate that 25% of HIV deaths can be attributed to drug use other than alcohol or tobacco, researchers classified 19 of these 76 deaths (25%) as “drug-attributable”.

Posted at 09:46 AM in Science Threads on Addiction, Substance Use, and Health (STASH) | Permalink