« The DRAM Vol. 12(9) – “To drink or not to drink?” Abstinence and quality of life among recovering people | Main | STASH, Vol. 12(9) – Brain fry: Perfectionism and attitudes about smart drug use »

ASHES Vol. 12(9) - What’s stalling reductions in tobacco use among US high school students?

What is the prevalence of current use of seven types of tobacco products among high school students in the United States?

Singh and his colleagues analyzed data from the 2011-2015 National Youth Tobacco Surveys (NYTS). The CDC conducts the NYTS among a nationally representative sample of middle and high school students from public and private schools. Student who participate in NYTS answer questions about demographics, tobacco use attitudes and behaviors, and exposure to pro- and anti-tobacco influences. The NYTS assess current (past 30 days) prevalence for seven types of tobacco products: cigarettes; cigars; smokeless tobacco; electronic cigarettes; hookahs; pipe tobacco; and bidis.

In the 2015 survey, 25.3% of high school students reported any current tobacco use. As Figure 1 shows, from 2011 to 2015 the prevalence of traditional forms of tobacco such as cigarettes, cigars, and smokeless tobacco decreased. However, during that same time period, high school students’ use of electronic cigarettes grew significantly from 1.5% percent using in 2011 to 16.0% reporting use in 2015. During the study period, the prevalence of current hookah use also increased from 4.1% to 7.2%.

Although the prevalence of any current tobacco use has not changed much in the past five years for high school students in the US, it’s clear that patterns of use are shifting as different types of tobacco products are growing in popularity among high school students. It’s possible that prevention efforts have been successful at reducing the use of more traditional forms of tobacco like cigarettes while being caught flat footed as new products such as e-cigarettes have been introduced. Tobacco control and prevention efforts should be adjusted to better regulate new forms of tobacco products and raise awareness about the dangers of these products.

The cross-sectional study design means researchers can explore differences in rates of use across the study period, but cannot assess whether or how individual respondents have changed their behavior. The researchers only invited youth currently enrolled in school to participate in the NYTS making generalizability to all high school aged youth difficult. 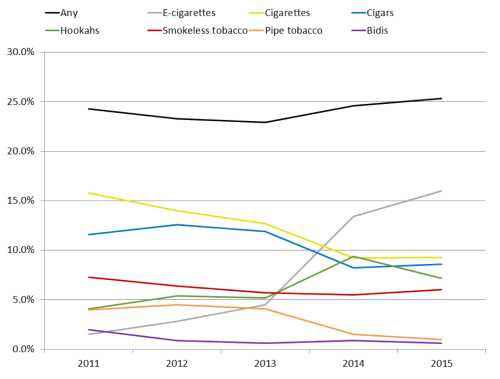 If you or a loved one has a desire to quit smoking visit our first steps to change here.

The National Cancer Institute has a website called Smokefree Teen. It provides support for teens looking to quit smoking.

The CDC also has a Guide for Quitting Smoking.

What's stalling reduction in tobacco use among youth? Nothing. Smoking rates have indeed gone down, and we should all be happy about this. But labeling vaping as a "tobacco" product when they don't contain tobacco leads to this study being a political rather than a scientific study. Of course we don't want kids vaping or smoking, but trying to equate vaping with smoking is ridiculous. Mountain Dew contains caffeine derived from coffee beans, but that does not make it a coffee product.