« The WAGER, Vol. 21(11) – Links to the past: Childhood maltreatment and gambling disorder | Main | ASHES, Vol. 12(11) – Elevated risk: Gender-based violence and smoking in Appalachia »

The DRAM, Vol. 12(11) – Critical periods: The timing of child abuse and adult drinking

Child abuse is an ongoing public health problem and can have serious consequences for kids as they emerge into adulthood. For example, childhood physical abuse can  impact later drinking behavior and increase risk for alcohol abuse. This week, as part of our Special Series on Addiction and Domestic Violence, The DRAM reviews a study that examines whether specific patterns of childhood physical abuse lead to more risk for future adult drinking problems.

Does the timing of physical abuse play a role in alcohol use during young adulthood?

Researchers recruited participants by posting print and online advertisements within a single metropolitan area. The advertisements asked for young adults between the ages 18-25. Participants were initially screened and excluded if they were not within the age range or had poor health. A total of 300 participants completed a variety of questionnaires that asked about the occurrence of childhood trauma/abuse, personal and peer alcohol use, and psychological distress. 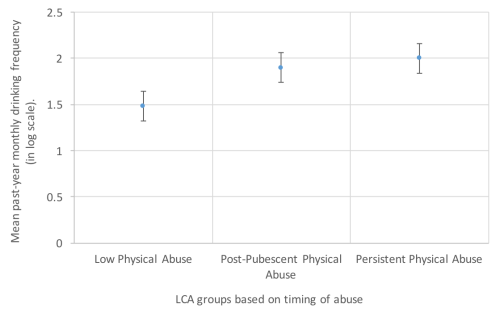 These results show that being physically abused in adolescence seems to have as serious an impact as persistent abuse. This suggests that there could be specific periods in a child’s life that are more sensitively influenced by physical abuse; therefore, depending on the timing and duration of the abuse, children may be put at increased risk for alcohol problems. This information can be used to educate, intervene, and hopefully prevent excessive alcohol use or other risky behavior later in life.

If you or a loved one has a problem with alcohol, please visit our first steps to change here.

Posted at 09:37 AM in Special Series, The Drinking Report for Addiction Medicine (DRAM) | Permalink