« STASH, Vol. 12(10) – Are children from homes that experience domestic violence at increased risk for illicit drug use in adulthood? | Main | The DRAM, Vol. 12(11) – Critical periods: The timing of child abuse and adult drinking »

The WAGER, Vol. 21(11) – Links to the past: Childhood maltreatment and gambling disorder

Many of those suffering from gambling disorder also suffer from other issues such as anxiety, depression, and impulsivity. Similarly, people who experience maltreatment during childhood are at risk for a wide range of mental health disorders. This week, as part of our Special Series on Addiction and Domestic Violence, The WAGER reviews work by Samuel K. Shultz and his colleagues that studied past childhood maltreatment among those suffering from gambling disorder.

Are people suffering from gambling disorder more likely to have suffered from childhood maltreatment?

Shultz and his colleagues recruited participants with gambling disorder[1] (n = 94) and matched controls[2] (“control group”, n = 91) who did not suffer from gambling disorder from their local community in northern Iowa. They interviewed participants in person and asked them about any history of childhood maltreatment in the following five categories: neglect, emotional abuse, verbal abuse, physical abuse, sexual abuse. They used chi-square tests to compare the childhood maltreatment rates of those suffering and not suffering from gambling disorder.

For each of the five categories of childhood maltreatment, the gambling disorder group reported statistically significantly higher rates of maltreatment than the control group. See Figure. 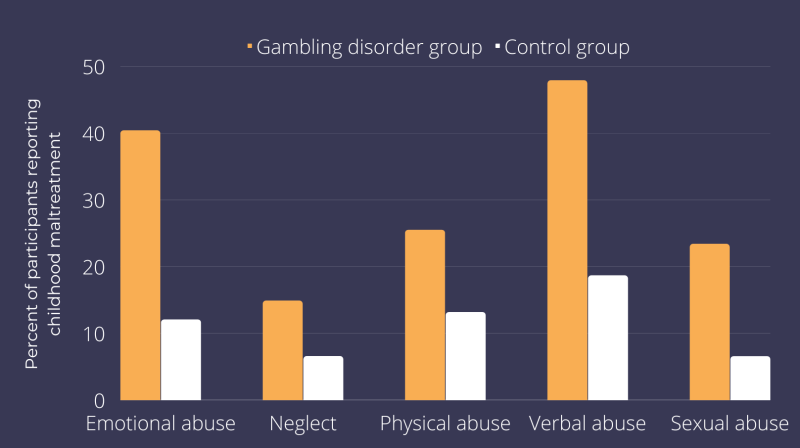 Figure. Percent of participants in the gambling disorder and control groups reporting and not reporting past childhood maltreatment. Adapted from Shultz et al. (2016).

Through both academic research and lay media, people have heard about the importance of childhood experiences. On one hand, positive experiences, such as strong parental involvement and early education, can help set the tone for a long and productive life. On the other hand, negative experiences, such as emotional and physical abuse, can become obstacles to health and success that lead to further issues. It should be noted that this study showed an association between childhood maltreatment and gambling disorder, and did not imply any sort of causation. It could have been that those suffering from maltreatment were also more likely to have been unsupervised or more likely to have been exposed to gambling or substances at an early age. Future studies should explore possible mechanisms and life experiences that link childhood maltreatment to gambling disorder.

In the sample Shultz and his colleagues obtained, minority participation was low, reducing the generalizability of the results. Also, childhood maltreatment was self-reported from past experience. Although the methods the researchers used to obtain responses are considered reliable and valid, misreporting and misclassification still was possible.

The U.S. Department of Health and Human Services has a website with information on child abuse.

Your First Step to Change is a website for those who believe that gambling is adversely affecting their lives and wish to do something about it.

[2] Controls were matched based on age, gender, and educational level.