STASH, Vol. 13(1) – For adults only: Evolving attitudes about marijuana among Gen X-ers

As people age, their attitudes often change. Opinions can transform for many reasons. Circumstances evolve, people look at questions from different points of view, exposure to and knowledge about events and subjects changes. As multiple states legalize or consider legalizing marijuana, researchers have been surveying and studying changes in public opinion of marijuana use. This week, ASHES reviews a longitudinal study by Rick Kosterman and his colleagues on Gen X-ers’ views on marijuana use as they moved from adolescence to adulthood.

Have these Gen X-ers’ attitudes towards marijuana use changed over the last three decades?

Researchers with the Seattle Social Development Project began in 1985 with 1,053 fifth-graders from 18 elementary schools in the Seattle area. This longitudinal study followed these Gen X-ers from age 10 until age 39 (in 2014). They lost 12% of the sample to attrition. Across three decades, researchers surveyed participants on a number of risk factors and health issues. Kosterman and his colleagues focused on responses to a key question: whether “people your age” should be using marijuana. During the last assessment, when many of the participants were parents, the study collected data on the parents' views on their own children’s marijuana use.

The percentage of participants who approved of people their age using marijuana increased from 1% at age 10 to 52% at age 39. In the last wave of data collection, 19% reported that they either thought it was okay for their children to use marijuana or that the decision should be left to their children responses. (See figure.) By comparison, in a similar survey in 1991, only 6% of parents gave similar responses.

Like with alcohol, people see marijuana as riskier for kids than for adults. Still, it is alarming that adult acceptance of teen marijuana use has increased. Especially in locations where cannabis products are legal and available, efforts should be taken to educate parents and children about the potential legal and health consequences of underage marijuana use.

This study followed a cohort in one particular metropolitan area in the U.S., and may not represent other populations. In particular, Washington is one of the few states that has voted to legalize and regulate marijuana dispensaries. Results will likely not be similar in locales that have voted down similar measures. Furthermore, this longitudinal study did suffer some participant attrition. It is not clear if those who dropped out would have been more or less likely to respond in favor of or against marijuana use. 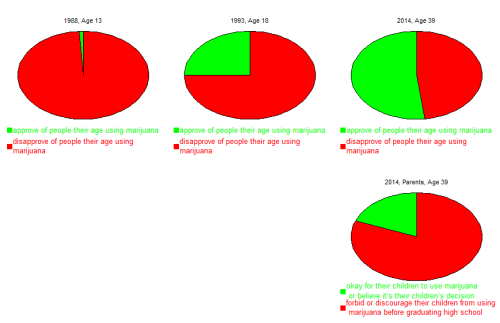 Many states that have legalized marijuana use, such as Colorado and Oregon, have webpages and information pamphlets dedicated to giving parents tips on preventing underage marijuana use.

Posted at 11:40 AM in Science Threads on Addiction, Substance Use, and Health (STASH) | Permalink

As someone who uses marijuana regularly and believes in its medicinal affects, I do believe consuming it during the brains development years (around 20 years old) is a mistake.