The DRAM, Vol. 13(1) – What do you think? Perceived peer attitudes & adolescent drinking

The influence of norms on attitudes and behavior is particularly strong during adolescence, a period of pronounced developmental changes. Research has established a robust association between perceptions about peers’ drinking behavior (called descriptive norms) and drinking among young people. A recent study by Eric Pedersen and colleagues seeks to enrich our understanding of the relationship between norms and adolescent drinking by focusing instead on how perceptions about peers’ attitudes about drinking (called injunctive norms) affect drinking among high school students. The DRAM reviews this study.

How do perceptions about peers’ attitudes regarding the acceptability of behaviors (i.e., perceived injunctive norms) relate to drinking behavior among high school students?

The authors surveyed 2,493 youth in 11th and 12th grade, who were participating in CHOICE, a voluntary after-school substance use prevention program. Participants completed a set of measures related to alcohol use, alcohol-related consequences, and perceived peer descriptive and injunctive norms[1]. Researchers used a path model to measure the direct effect of both descriptive and injunctive norms on alcohol use and alcohol-related consequences. 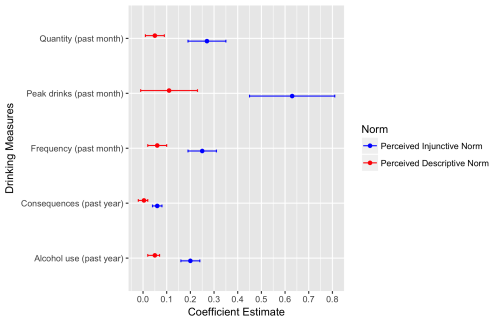 * The circles in the figure represent model coefficients and the lines indicate 95% confidence intervals.

To date, efforts to prevent risky drinking have mostly targeted correcting adolescents’ overestimates about how much their peers are drinking. They try to teach kids that their peers aren’t drinking as much as they think they are. The findings from the present study suggest that a more nuanced approach that also targets beliefs about how acceptable or unacceptable peers find certain drinking behavior will increase the effectiveness of future interventions.

One of the primary limitations of the study – acknowledged by the authors – pertains to the fact that the variables of interest were measured at a single time point. This means that the study cannot tell us for sure whether these norms influence drinking behaviors. It is possible, for example, that youth who are drinking more are associating with peers who are more accepting of drinking behaviors.

If you are concerned about yours or a loved one’s drinking, visit our website for the First Step to Change: Drinking, a free, anonymous toolkit.

[1] Researchers measured perceived peer descriptive norms by asking how many students respondents believed drank alcohol at least once per month. They measured perceived peer injunctive norms by asking respondents to rate \how acceptable they thought the typical student in their grade finds a) playing drinking games, b) drinking to get drunk, c) drinking alcohol every weekend, c) drinking under age of 21, d) drinking alone, e) never drinking, and f) drinking after driving). The last two items were dropped from analyses because they did not relate to the other items.

Posted at 11:40 AM in The Drinking Report for Addiction Medicine (DRAM) | Permalink