« ASHES, Vol. 13(2) – Is a picture worth a thousand words? Effects of pictorial cigarette pack warnings on smoking | Main | National Policymakers versus Internationally Minded Researchers? Lessons from a Case Study »

STASH, Vol. 13(2) - Who is using medical marijuana and how do they compare to recreational users?

More than half of the U.S. states and territories have laws permitting medical use of marijuana. Knowing who is using medical marijuana can inform efforts to reduce the potential harms. This week STASH reviews research from Dr. Wilson Compton and his colleagues published in JAMA that explores medical marijuana use among US adults. 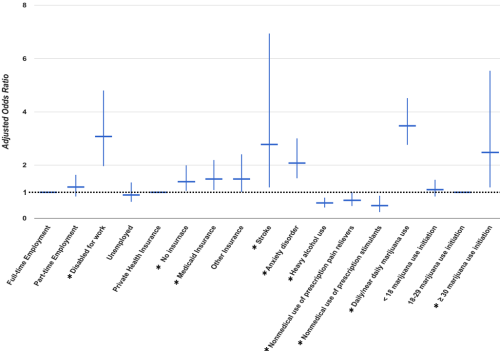 Note. * indicates findings with statistical significance. The horizontal bar is the adjusted odds ratio and the vertical line is the confidence interval.

New treatment options such as medical marijuana have the potential to alleviate some health conditions. These findings indicate that those who use medical marijuana were more likely to be disabled and to have significant physical and mental health conditions than recreational users. Like any new medicine, there is the potential for for unintended consequences. In this case, those unintended consequences were positive, as medical marijuana users were less likely to misuse other drugs or alcohol. And they were more likely to initiate their marijuana use after the brain has fully developed reducing the possibilities for harm and misuse.

Posted at 12:22 PM in Science Threads on Addiction, Substance Use, and Health (STASH) | Permalink