« Gambling and gaming are converging: “Won’t someone think of the children!”? | Main | STASH, Vol. 13(2) - Who is using medical marijuana and how do they compare to recreational users? »

ASHES, Vol. 13(2) – Is a picture worth a thousand words? Effects of pictorial cigarette pack warnings on smoking

The individual, familial and societal costs of smoking are staggering. Adding pictures that warn about the dangers of smoking to cigarette packs is one policy approach to nudge smokers towards quitting. Most studies – across several countries -- that have studied the effect of these pictorial warnings have found that they increase quit attempts and reduce the prevalence of smoking. However, a few studies have shown that the effect does not always hold. The ASHES, this week, reviews a study by Dr. Noel T. Brewer and colleagues, that used a randomized clinical trial design to test the effect of these warnings.

How does adding pictorial warnings to the front and back of cigarette packs affect smoking behavior?

The researchers recruited 2,149 adult smokers in North Carolina and California for the study.  About half of the participants were assigned to receive text-only warnings, while the other half were assigned to receive pictorial warnings[1]. During each visit, the research staff took the cigarette packs that the participants brought[2], and applied self-adhesive pictorial or text-only warnings to the front and back of their cigarette packs. Each week, participants reported about their attempts to quit smoking. During their final visit, participants also completed a survey about their reactions to the warning messages and their smoking attitudes and expectations.

The primary finding of the study was that pictorial cigarette pack warnings discourage smoking. Forty percent of participant who saw pictorial warnings tried to quit, compared to 34% in the text only condition. Further, the study also found that 5.7% of those receiving pictorial warnings had quit smoking one week prior to the end of the trial, compared to 3.8% of those exposed to text-only warning (see Figure 1). Participants who received the pictorial warning messages had stronger emotional and cognitive reactions such as fear and thinking about the harms of smoking, and more conversations about the warning than those who received text-based warnings.

Figure: The percent of participants who attempted to quit and actually quit smoking a week before the end of the trial in the pictorial and text-only warning groups. Adapted from Brewer et.al., 2016). Click image to enlarge 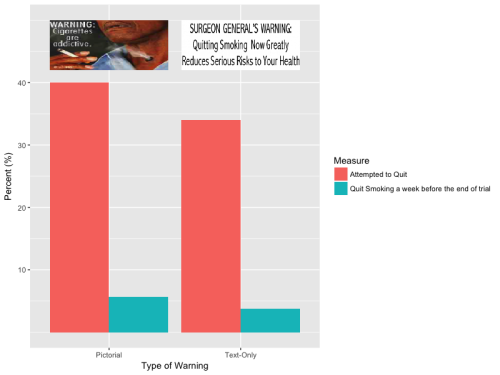 The 2009 Family Smoking Prevention and Tobacco Control Act made pictorial warnings on cigarette packs mandatory. However, a lawsuit by the tobacco industry in the US Court of Appeals for the District of Columbia Circuit has since stalled the implementation of the Act. In ruling against the pictorial warnings, the Court stated: “FDA has not provided a shred of evidence…showing that the graphic warnings will ‘directly advance’ its interest in reducing the number of Americans who smoke.” The results of this clinical trial begin to provide that evidence.

As the study was conducted over a period of one-month, it is not clear how the behavior of participants would have unfolded over a longer amount of time. Further, as participants were told that the goal of the study was to examine how smokers understand the labels on their cigarette packs, it is feasible that some of the participant’s responses were influenced by what they perceived to be the researchers’ expectations.

If you are concerned about yours or a loved one’s smoking, visit our website for the First Step to Change: Smoking, a free, anonymous toolkit.

[2] Participants were told to bring 8-day supply of cigarettes to their first visit, as well as to 4 follow-up visits spaced one-week apart.